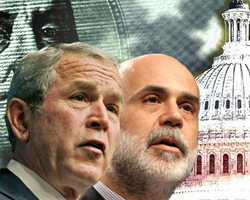 In case you haven’t noticed, things aren’t going terribly well on the worldwide financial markets. President Bush isn’t insensitive to that fact—that’s why, a few days ago his administration announced the rough outlines of an economic stimulus plan. And it is going to help everyday folks, not just big business. Tax credits will flow like manna from heaven: $800 for individuals and $1,600 for married couples are the most commonly cited figures (more on that below). “Letting Americans keep more of their money should increase consumer spending,” the president said.

Oh, but wait. The Tax Policy Center, a joint effort of the Brookings Institution and the Urban Institute, did an analysis of Bush’s plan and found that a number of people (and by “a number of people” I mean millions of people) would be shortchanged. And the poor were the most likely to get the short end of the stick.

All of this, plus the rapidly worsening economic news, has forced the White House to admit today that it is open to a larger stimulus package. The hope, however, is that the package is not only larger, but more fairly and evenly spread.

Further criticism after the jump.

The plan is being described as featuring a rebate of $800 to individuals and $1,600 to couples. That, however, is misleading. Only tax filers with incomes high enough to be in the 15 percent tax bracket or a higher bracket could get those amounts. As a result, fewer than half of all households — and fewer than 60 percent of all working households — would qualify for the full rebate.

Households that earn too little to be in the 10 percent bracket would get nothing. The fact that many of these households pay large amounts of payroll tax would be ignored. Families of four making less than $24,900 would be shut out entirely. The Tax Policy Center data show that 30 million working households would receive nothing.

It’s a real shame that middle class and working class families aren’t going to get a piece of the pie under the Bush stimulus plan, because (1) they need the help the most, and (2) they stimulate the economy best. As Federal Reserve Chairman Ben Bernanke told Congress, “If you’re somebody who has lots of financial assets and you receive an extra dollar, you may not change your spending much because you can simply either put the dollar in your bank account or take out a dollar as you need it. If you’re somebody who lives paycheck to paycheck, you’re more likely to spend that extra dollar.”

Update: If you can’t get enough of this sort of analysis, you can find more here.