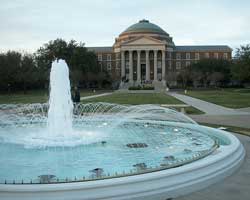 At a White House press conference on Thursday morning, George W. Bush was a bit too cute when it came to an important matter: the funding of his presidential library.

News reports have noted that the library, to be set up at Southern Methodist University, will cost more than $200 million. The question is, who will pay for it? The tabs for presidential libraries are not covered by the taxpayers. They are picked up by nonprofit foundations, and these foundations have no obligation to disclose their sources of money. Bill Clinton has refused to say who is funding his library through the William J. Clinton Foundation, though the Washington Post reported that the royal family of Saudi Arabia contributed $10 million to the Little Rock facility.

It is troubling when the spouse of a presidential candidate receives millions of dollars secretly from one or more overseas sources. But what’s more problematic is the prospect of a sitting president obtaining foreign cash for a pet project and not disclosing it. (The Saudis reportedly also gave the presidential library of the first President Bush millions of dollars. After being generous to George H.W. Bush and Bill Clinton, it’s unlikely they will stiff the younger Bush)

At the press conference, a reporter asked Bush if he would disclose the contributions received for his presidential library? He didn’t say yes. He replied that “we’ll look at the disclosure requirements and make a decision.” But there are no disclosure requirements. So that was a non-answer. (Coincidentally–or not–Barack Obama has introduced legislation that would compel the disclosure of donations to presidential libraries.) Bush went on to note that “some people like to give and don’t like their names disclosed.” That’s the issue, isn’t it? And he added that he would “probably take some foreign money” for his library.

These comments raise the possibility that he or his foundation might solicit secret contributions from foreign sources–governments, individuals, corporations–while Bush is in office. What an easy way for these foreigners to curry favor. And, of course, the Bush Foundation could hit up American corporations and individuals looking to score points with the White House.

After Bush refused to promise any disclosure, the reporter at the press conference asked, what about the public right to know? Bush replied, “We’re taking a look….Nice try, though.” Nice try? This is an important matter of transparency and good government, and Bush dismissed the reporter’s query as merely another attempt at gotcha. And he smirked.