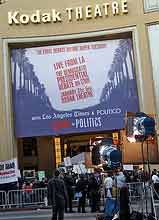 Barack Obama and Hillary Clinton went mano-a-mano during a Democratic presidential debate broadcast from the Kodak Theater in Los Angeles on CNN Thursday night. The debate left me feeling buzzed, annoyed, and inspired. Here’s why:

Buzzed:
I strongly recommend drinking scotch with your friends and colleagues while watching political debates. Nothing like a little Johnny Black—neat—to liven things up a bit. Under the influence, you realize that Hillary makes these sort of pursed-lip fish faces when she’s listening to other people speak, and that Obama is a southpaw. Who knew?

Annoyed, Part 1:
I just wasn’t digging Wolf. His efforts to ask hard-hitting questions—the damn Hillary driver’s license question again? Sheesh, let’s move on!— were like poking at embers in a dwindling fire. And how does he get his beard and his hair to look so perfect?

Annoyed, Part 2:
What was with the lame camera work? I swear, 9 times out of 10, when Obama was speaking, they would cut to a black person in the crowd to get a reaction. And every time Hillary spoke, they’d cut to a female audience member. Okay, Barack is black, and Hillary is a woman. We get it, CNN.

Inspired:
I haven’t slogged through every single campaign trail debate like some of my MoJo colleagues (I prefer much less important topics like my own music snobbery), but I have to say that the debate mostly consisted of smart, healthy dialog about actual issues, with minimal bickering. Beneath all the mud we’ve seen in previous weeks, here was a glimmer of hope: a cordial, fairly meaningful conversation. And maybe it’s his smooth delivery, or maybe I’m just a sucker, but hearing Obama talk about getting people engaged in politics again is actually kinda sorta believable.

Lastly, how about Hollywood getting all political and stuff? Man, there were so many A-list stars in the Kodak theater, it could just as easily have been a casting call for the next Terrence Malick film! Folks like Alfre Woodard, Topher Grace, and Pierce Brosnan all had their serious game faces on (well, at least when the camera zoomed in for a close-up). Hell, even Stevie Wonder showed up!

When the end of the debate rolled around, Wolf asked the two candidates if they would consider running together; and the obvious jokes were made about whose name would come first. But based on the volume of the applause in the crowd, the idea actually seemed plausible. A black man and a woman running the country for four years: I can’t wait to see CNN’s coverage of that. The camera wouldn’t know which way to look.