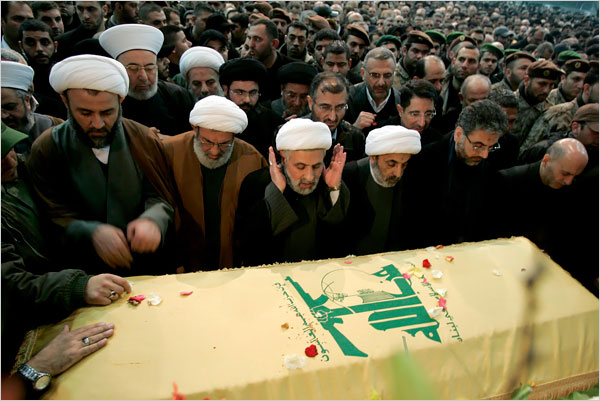 As a tense south Beirut buried assassinated Hezbollah militant Imad Mugniyah Thursday and Israel and the region braced for feared retribution and an escalation of tensions, analysts continued to speculate on who killed the elusive terror suspect. (See this piece for a primer).

Former CIA officer Robert Baer, who served in Beirut and extensively researched Mugniyah, offered a model about how things might have gone down. “An old friend of mine,” Baer emailed. “Friend may not be the word. Anyhow the Israelis persuaded him to set off a car bomb in a Damascus bus station. He used the Guardians of the Cedars, paid them something like $200,000. Bomb went off as requested.”

“Point two is Syria these days is completely corrupt,” Baer added. “You buy what you want.”

Former Defense Department analyst and Levant expert David Schenker, now at the Washington Institute for Near East Policy, ruled highly unlikely the Syrians doing it themselves. “The Syrians feel perfectly comfortable to kill their own and they do,” Schenker said in a telephone interview. “But they don’t do it like that. They render them,” as they did Kurdish Workers’ Party leader Abdullah Ocalan, as Turkish troops amassed on the the Turkish-Syrian border threatening an invasion.

“This is not a case like Ghazi Kanaan, who was the Syrian viceroy in Lebanon,” Schenker continued. “In Arabic, they say, ‘He was suicided.’ He ‘killed himself’ with two shots to the head. He knew too much about the Hariri assassination.”

(You can catch Schenker and other colleagues from various perches blogging on the issue and all things Middle East here).

Israel has denied it carried out the Mugniyah assassination. “Israel rejects the attempt by terrorist elements to ascribe to it any involvement whatsoever in this incident,” the office of prime minister Ehud Olmert said in a statement.

“They consider him a terrorist,” one mourner at Mugniyah’s funeral, Zahra, told the Washington Post‘s Anthony Shadid. “For us, he is a hero who was fighting our enemy.”