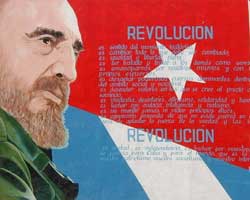 Please, no tears for Comrade Castro, as he finally gives up power in Cuba. It’s a good thing he’s going. But his departure has taken far too long (in fact, decades too long) and, alas, in all that time he did little to ease the transition to the free society that Cuba will eventually be. His exit leaves Cuba a repressive state and a nation not prepared for the future. The gains of his revolution—such as the decent universal health care system—are imperiled by the changes that will sooner or later hit Cuba. Rather than manage a transformation from one-party (one-man!) communism to a more open system, Castro has set up Cuba for a possible cataclysmic counterrevolution that may not benefit the people of Cuba.

I’ve often wondered why some American leftists have been soft on Castro. How could anyone who gives a damn about human rights and freedom root for Castro in his face-off with the Yanquis of the North? As the Committee to Protect Journalists noted last August,

With 24 independent journalists in prison, Cuba continues to be one of the world’s leading jailers of journalists, second only to China. Twenty-two of these journalists were jailed in a March 2003 crackdown.

Late last week, Spanish Foreign Minister Miguel Angel Moratinos announced that Cuba would release two of those journalists. That would leave Cuba with 22 reporters behind bars and still in second-place globally as a jailer of journalists. (Iran, as of December, had 12 imprisoned journalists.) As CPJ has described the obvious, there is no freedom of expression in Cuba: “The government owns and controls all media outlets and restricts Internet access. The three main newspapers represent the views of the Communist Party and other organizations controlled by the government.”

What’s so revolutionary about denying citizens access to the Internet?

But criticism of Castro’s tyrannical ways should never be confused with support for the U.S. government’s absurd policies regarding Cuba—policies that have been supported by Democratic and Republican administrations. Yet justifiable opposition to Castro’s repression has too often been used to justify these policies. And Barack Obama this morning showed how easily that can be done.

Today should mark the end of a dark era in Cuba’s history. Fidel Castro’s stepping down is an essential first step, but it is sadly insufficient in bringing freedom to Cuba.

Cuba’s future should be determined by the Cuban people and not by an anti-democratic successor regime. The prompt release of all prisoners of conscience wrongly jailed for standing up for the basic freedoms too long denied to the Cuban people would mark an important break with the past. It’s time for these heroes to be released.

So far, so good. Then Obama joined the forces of the status quo:

If the Cuban leadership begins opening Cuba to meaningful democratic change, the United States must be prepared to begin taking steps to normalize relations and to ease the embargo of the last five decades. The freedom of the Cuban people is a cause that should bring Americans together.

Lifting the embargo need not wait until freedom flourishes in Cuba. The embargo allows the Cuban leadership to keep its hold on power (with or without Castro), and it penalizes Cubans for living within a repressive state. Unfortunately, such a state will probably continue with Castro gone—as will the U.S. policies that have done nothing to bring positive change to Cuba.