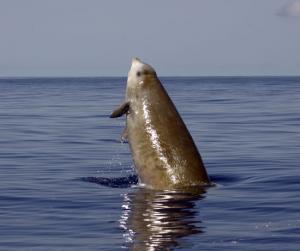 In the last week federal courts have twice slapped the Navy for sonar testing in the ocean. The first, by a federal court in San Francisco, is a preliminary injunction against the use of Low-Frequency Active (LFA) sonar, which relies on extremely loud, low-frequency sound to detect submarines at great distances. According to the Navy’s own studies, LFA generates enough noise to significantly disrupt whale behavior more than 300 miles away, and under certain conditions can cross an entire ocean basin. Yet the Navy wants to deploy LFA in more than 75 percent of the world-ocean, reports ENN. “This order protects marine life around the world from a technology that can affect species on a staggering geographic scale,” said Joel Reynolds of the National Resources Defense Council, lead group in the coalition asserting that an LFA permit issued last year by the National Marine Fisheries Service violates the Marine Mammal Protection Act and the National Environmental Policy Act.

The second injunction was for Mid-Frequency Active (MFA) sonar in exercises off southern California. MFA sonar, also used in submarine detection, has been linked to mass deaths of whales in the Bahamas, the Canary Islands, and elsewhere, reports the Los Angeles Times. A federal judge in Los Angeles already ruled against the Navy on this. The Bush administration was attempting to reverse that ruling, pleading that “emergency circumstances” prevented normal compliance with the law. No go, said U.S. District Judge Florence-Marie Cooper, calling Bush’s effort to maneuver around the original court order “constitutionally suspect.”

In yet another ruling from the federal court in San Francisco, the Department of Defense was ordered to consider the impact of a proposed military base in Japan on the dugong, an endangered marine mammal revered in Japanese culture. Military.com reports that U.S. District Judge Marilyn Hall Patel ruled the U.S. military violated federal law when it failed to evaluate the air station’s potential effects on the Okinawa dugong, a 1,000 pound marine mammal related to the manatee and the extinct Steller’s sea cow. Judge Hall Patel sided with Earthjustice and other American and Japanese environmentalists who argued plans to relocate the Futenma Air Station to a site off the northeast coast of Okinawa would threaten the dwindling number of dugong that live in the seagrass beds around the island.

Finally, if you’re interested in some of the newest science on why loud sonar is bad for marine mammals, there’s a fascinating new study in the Institute of Physics’ Journal, Bioinspiration & Biomimetics. Researchers from San Diego State University and the University of California have been using computer models to mimic the effects of underwater noise on an Cuvier’s beaked whale, and have discovered a new pathway for sound entering the head and ears—not through the lower jaws but through the throat to the bony ear complex via a unique fatty channel known as the gular pathway.

The lesson for Navy peeps is Shhhh…

Julia Whitty is Mother Jones’ environmental correspondent and 2008 winner of the John Burroughs Medal Award. You can read from her new book, The Fragile Edge, and other writings, here.