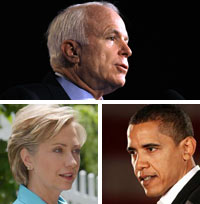 An interesting question that undecideds voting tomorrow might like to think through: which Democratic candidate is better suited to beat John McCain, the likely Republican nominee, in the general election?

McCain would be a tough opponent for either candidate. If he faces off against Clinton in the general, he will neutralize her primary arguments: experience and immediate fitness for office. McCain matches and beats Clinton’s credentials on foreign policy, and can hammer her for playing the lobbyist/earmarks/special interest game.

But Obama has problems with the match-up too. One of Obama’s strengths is that he is viewed as a candidate who would restore integrity to the White House and clean up Washington. McCain is viewed the same way. In fact, McCain can argue that because he took the lead on campaign finance reform, he actually has done more than Obama on one of Obama’s key issues. What you are left with is a young(ish) man with no foreign policy experience facing off with a war hero and a former chairman of the Senate Armed Services Committee.

But that doesn’t mean the Democrats don’t have advantages.

According to the respected polling firm Greenberg Quinlan Rosner, the country’s political environment, divorced from any details about the candidates, favors the Democrats. They write:

• 49 percent support a generic Democrat for president, 5 points ahead
of the Republican candidate. The support for the Democrat has not changed a point in many months. As the actual Republican nominee has emerged, many dislodged Republicans have moved back to their candidate.

• Voters have watched the primaries closely and say they much prefer
the Democrats’ issue priorities and their qualities of leadership. The post-primary environment is very favorable for Democrats.

• When one takes McCain’s position on Iraq and the economy and contrasts that with the Democrats, voters show a strong aversion to McCain’s direction. Voters want to begin troop withdrawals, not create a long-term U.S. presence in Iraq. Voters favor a stimulus with investments, unemployment insurance and middle class tax cuts, not simply making Bush’s tax cuts permanent.

No matter what advantages John McCain has, and no matter what nasty stuff the right wing throws at Clinton or Obama, there may be a nationwide resistance to conservative leadership after eight years of George W. Bush that is impossible to overcome for the Republican nominee.

And that is one of the two reasons why Obama is likely better positioned that Clinton. Obama better embodies change because he represents a different generation, in both thinking and appearance, than McCain. His foreign policy thinking is completely different—he didn’t support the war in Iraq, didn’t vote to label Iran’s Revolutionary Guard a terrorist organization, sees the silliness of our policy toward Cuba, and rejects the Bush-Cheney approach to diplomacy that refuses to meet with rogue leaders. Clinton mirrors McCain on all of these issues (though she obviously has a very different view on Iraq right now). And in terms of appearance, Clinton and Obama are both divergences from the old white male archetype, but only one would represent the widest age gap between two major party candidates in modern history. Obama was born in 1961. McCain was born in 1936. That’s a 25-year difference.

Also, McCain does well amongst independents. Obama likely matches him in that category, while adding a number of young voters. Clinton, however, finds most of her supporters in core Democratic constituencies. She would likely lose the battle over independents to John McCain. Current head to head polling shows McCain beating Clinton ever so slightly and losing to Obama ever so slightly. That indicates little, however, because a number of things will change between now and November.

But this is all educated guesswork. The best answer to the question in the title of this blog is that there’s no way to know definitively. Better to vote your heart and hope for the best.

We’d be interested in knowing who our readers think has a better chance against the Senator from Arizona.