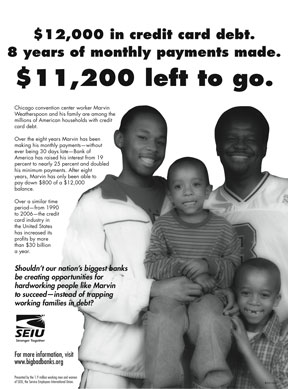 In 2000, Illinois resident Marvin Weatherspoon (right) got a Bank of America credit card that he used to consolidate $12,000 in home repair bills, thinking the 4.5 percent introductory interest rate would help him get out of debt faster. Instead, though, eight years later, he has paid the bank more than $15,000, yet has reduced his principal balance by only $800. The reason? Even though he’s paid his bills on time, Bank of America inexplicably raised his interest rate, first to 19.99 percent and then to 25 percent, where it is today.

Weatherspoon came to Washington yesterday to tell his story at a hearing on the Credit Card Holders Bill of Rights, a bill sponsored by New York Rep. Carolyn Maloney (D-NY) that would restrict the kind of arbitrary interest rate increases Weatherspoon got hit with, among other things. But as it turned out, Weatherspoon never got to testify. The ever-powerful credit-card companies successfully bounced all of the consumers off the panel, leaving only academics and credit card executives to speak publicly.

At the outset of the hearing before a subcommittee of the House Financial Services Committee, Maloney explained that “there have been fairness concerns raised about having consumers testify this morning without a waiver that allowed their credit-card issuers to respond publicly.” Translation: The credit card companies wanted the consumer witnesses to make their financial records public so the banks could “rebut” their complaints, i.e., trash them in the press.

It’s not unusual for Congress to ask hearing witnesses to sign privacy waivers. When Sen. Carl Levin held a hearing on credit card abuses in the Senate last year, witnesses also signed privacy waivers, but they were designed to allow only the Senate staff to access some of their financial information so they could verify it in advance of the hearing. It was basically for the Senate’s own due diligence.

But the waivers that Weatherspoon and the others were asked to sign were far broader, and they were foisted on the witnesses only hours before the hearing. Some of the witnesses didn’t get them in advance at all. The credit-card executives, of course, weren’t asked to sign any waivers at all that might allow Congress to actually verify the claims they were making.

Democratic members of the committee protested, and Republicans threatened a bunch of disruptive procedural maneuvers if the waivers weren’t signed, so Maloney and Frank agreed to put the consumers on ice until some later day, probably in April. Still, score one for the banks. For the moment, they headed off another day of bad press, as without the consumer angle, the media all but ignored yesterday’s hearing.