There have been a few “comic remixes” that have probably landed in your e-mail boxes over the years: The Dysfunctional Family Circus predates the internet, in fact, replacing the originals’ cloying observations with sick jokes about incest and drugs, while “Marmaduke Explained” attempts to find humor in this bafflingly non-funny comic via deadpan explanations that are even less funny. But recently I’ve come across a reinterpretation of a much-derided comic that’s pretty stunning, not only because it makes the originals funny, but because it does so not through addition, but through subtraction.

Garfield Minus Garfield has a simple formula: erase (presumably through the magic of Photoshop) every instance of the irrepressible, overweight feline, leaving only Jon Arbuckle to talk to himself. The results are devastating (and hilarious) treatises on loneliness, without punch lines or jokes, reminiscent of the appallingly bleak early Peanuts strips.

Sometimes, the lack of Garfield and his thought bubbles leaves panels completely empty, yet somehow, you can still “get it”:

It’s unsettling, to say the least; was this brilliant streak of voyeuristic schadenfreude always there, hiding beneath the surface of an annoying comic strip? Moreover, why exactly does removing Garfield change the meaning so significantly?

If one stops looking at Garfield as a cat, per se, and instead looks at him as a symbol, it starts to make more sense. Really, if you think about it, Garfield barely resembles a cat. He is more of a logo, a product, a nonsense shape whose meaning derives only from its position in popular culture, as something you can buy. Garfield exists merely as a trinket, another blip in the continual accelerating churn of late capitalism’s ravenous hunger for the “new.” But these trinkets are merely salves for the underlying horrors of late capitalism: social fragmentation, isolation, anxiety. Remove the product from our lives, and we’re left with nothing.

Like the angst-ridden figure in Munch’s The Scream, Jon Arbuckle is crying out, with no-one to hear. He is shorn of family, friends, or any social network whatsoever. He wanders his empty apartment, and without a product to focus on (even in irony), he vacillates between manic periods of self-delusion and moments of overwhelming sadness. Sometimes he seems to try and create his own “product”: a sock puppet, a grocery sack, even focusing on the ice tray as if its solidifying ice could pass for entertainment. 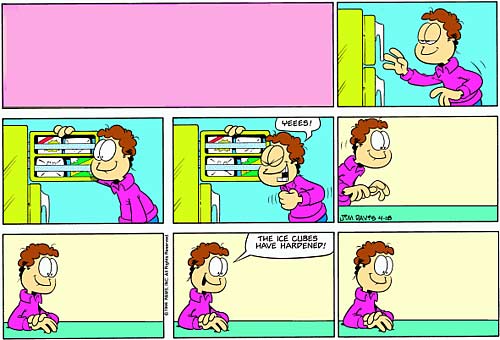 But none provide satisfaction, none bring the distilled notion of “other” inside, that glint of connectedness in the painted-on eyes of a market-tested logo. Our lives, minus product: laid bare as the pathetic, lonely sagas they’ve become. Did I mention it’s hilarious?

There are new strips up almost every day over at Garfield Minus Garfield. If you’re single, you might want to brace yourself before diving in.