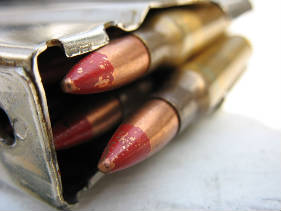 Zimbabwe’s Electoral Commission is now in the process of recounting ballots from last month’s presidential election in which the long-time strongman Robert Mugabe appears to have lost out to opposition parties, including the Movement for Democratic Change (MDC), led by Mugabe’s primary political nemesis, Morgan Tsvangirai.

As the recount continues, there are reports that Mugabe’s party, ZANU-PF, could be preparing for a crackdown. Human Rights Watch last week accused the regime of establishing “detention centers” in remote areas, allegedly to be “used as torture camps to punish rural voters for supporting the MDC.” Reports today suggest that Zimbabwe’s hospitals are quickly filling with victims of political violence.

Meanwhile, there’s another ominous sign of trouble ahead—a cargo ship loaded with weapons and ammunition from China, bound for Zimbabwe. According to reports in the South African press, the vessel, called the An Yue Jiang, carries three million AK-47 rounds, rocket-propelled grenades, and mortar shells. It was due to arrive in the South African port of Durban last week, but when word of the ship’s cargo reached shore, dockworkers refused to unload it. The dispute was referred to a judge, who upheld the dockworkers claim that the weapons, once transported to Zimbabwe, could contribute to “internal repression or suppression of human rights and fundamental freedoms.”

The vessel reportedly departed Durban Sunday night, possibly bound for ports in Angola or Mozambique for another attempt at offloading its cargo. If another attempt is made, there’s no guarantee either country will grant the request, at least if the International Transport Workers Federation (ITF) has anything to do with it. The London-based organization is calling on dockworkers in both African nations to reject the shipment.

“We’re trying very hard to track down where that ship’s going,” ITF general secretary David Cockroft told Voice of America, adding that his organization is also in talks with Chinese trade unions (still government-influenced, but “showing signs of independence”) in hopes of gaining their support.

The ITF finds the timing of arms shipment is highly suspect. According to Cockroft:

There is no reason why Zimbabwe needs three million rounds of AK-47 ammunition right now. There’s no prospect of there being a sudden external invasion of Zimbabwe. And so it is very difficult for anyone to conclude that this ammunition is likely to be used for anything other than to take action against opposition groups in the very controversial, very sensitive position which is still surrounding the aftermath of the Zimbabwe general elections.

What of the accusation that the dockworkers’ actions violate nations’ right to engage in free trade?

If this is free trade I’d love to see what unfree trade is like. This is a government-to-government activity…which is designed to bolster the regime in Zimbabwe, which is clearly a regime which is coming to its end. And there is no reason why there needs to be a supply of arms of this level at this stage in Zimbabwe history.

Photo used under a Creative Commons license from Wetsun.