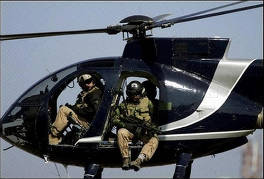 Friday afternoons have long been Washington’s dumping ground for stories that various power brokers would rather see whither and die, and last Friday was no exception. Shortly after the Clinton campaign finally released Bill and Hillary’s tax returns, showing they’ve netted over $100 million since 2000, the State Department announced that it would renew Blackwater’s security contract to protect U.S. diplomats abroad.

Blackwater’s involvement in a shooting incident in a Baghdad traffic circle last September remains under investigation by the FBI, although an earlier Iraqi review (albeit one conducted by the insurgent-penetrated Iraqi Interior Ministry) characterized the incident as “premeditated murder.” The U.S. private security firm is also the subject of federal probes regarding illegal weapons transfers and tax evasion. None of this, however, stood in the way of the State Department’s renewal of Blackwater’s five-year Worldwide Protective Services contract, originally awarded to the company in 2006 and subject to annual review.

The move has proved controversial in Iraq, where Prime Minister Nuri al-Maliki, weakened by his recent failed attempt to crush Muqtada al-Sadr’s Shiite milita, may be attempting to find an issue around which to rally whatever dwindling domestic support remains for his government. Indeed, Blackwater is so deeply unpopular with Iraqis that beating up on the company may be just the thing to distract attention from al-Maliki’s other problems, at least for the moment. In an interview with CNN, al-Maliki attacked the State Department’s decision, claiming the Iraqi government was not consulted on the renewal of the Blackwater contract, which it surely would have rejected based on the results of its own investigation in the September shooting incident.

As far as Iraqi government is involved, this issue is still under consideration and we are still discussing principles upon which foreign security companies must operate, especially this company because they committed a massacre against Iraqis and until now this matter has not been resolved.

No judicial action has been taken, no compensation has been made. Therefore the extension requires approval of the Iraqi government and the government wants to resolve the outstanding issues with this company.

I would say the US side should not move to renew the contract until the outstanding issues of the company are finalized. I feel the decision was taken without the approval of the Iraqi government.

Photo used under a Creative Commons license from James Gordon.