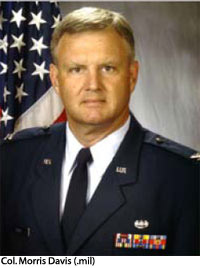 Air Force Col. Morris Davis, who used to be the chief prosecutor at Guantanamo Bay and a defender of the Bush Administration’s military tribunal system, took the stand Monday on behalf of a man alleged to be Osama bin Laden’s former driver in order to disseminate the truth about Guantanamo.

Davis was cross-examined by the Army officer who replaced him after his resignation last October, Col. Lawrence Morris, in one of the most dramatic challenges to the first American war-crimes tribunals since World War II…

Davis said he resigned hours after he was put in a chain of command beneath Defense Department General Counsel William Haynes, one of several officials who had encouraged the use of evidence even if it was gathered through waterboarding… “The guy who said waterboarding is A-OK I was not going to take orders from. I quit,” Davis said.

More after the jump…

[Davis] alleged, among other things, that Haynes appeared shocked when Davis suggested in a 2005 meeting that acquittals, however disappointing, could boost the credibility of the system.

“He looked at me and said ‘We can’t have acquittals, we’ve been holding these guys for years,'” Davis testified.

Davis accused Air Force Brig. Gen. Thomas Hartmann, a legal adviser to the official overseeing the tribunal system, of exerting inappropriate influence by simultaneously directing tasks for the prosecution team that was supposed to be independent.

He said Hartmann handpicked prosecutors for different cases and demanded cases that were “sexy” or “had blood on them” and would resonate with the public.

Gitmo currently holds about 250 prisoners, and used to hold many more. Only one person, Australian David Hicks, has been convicted of anything. During his testimony, Davis noted that Hicks, who accepted a plea deal that shipped him back to Australia for a nine-month prison sentence, never should have been charged. Mother Jones has written before about Hicks, the charges he levied against the United States government, the difficult plight faced by his lawyer, and the gag order he was placed under following his plea bargin to keep him from talking to the press about his time in Gitmo.

Davis also testified that one Department of Defense official asked for charges to be brought against the Gitmo detainees ahead of the November 2006 midterm elections.