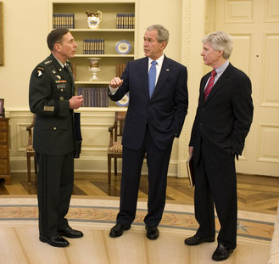 Just last week, following the testimony of General Petraeus and Ambassador Crocker on Capitol Hill, President Bush held a White House press conference at which he remained as optimistic as ever about U.S. prospects in Iraq. From the official White House transcript:

The immediate goal of the surge was to bring down the sectarian violence that threatened to overwhelm the government in Baghdad, restore basic security to Iraqi communities, and drive the terrorists out of their safe havens. As General Petraeus told Congress, American and Iraqi forces have made significant progress in all these areas. While there is more to be done, sectarian violence is down dramatically. Civilian deaths and military deaths are also down. Many neighborhoods once controlled by al Qaeda have been liberated. And cooperation from Iraqis is stronger than ever—more tips from residents, more Iraqis joining their security forces, and a growing movement against al Qaeda called the “Sons of Iraq.”

Improvements in security have helped clear the way for political and economic developments described by Ambassador Crocker. These gains receive less media coverage, but they are vital to Iraq’s future. At the local level, businesses are re-opening and provincial councils are meeting. At the national level, there’s much work ahead, but the Iraqi government has passed a budget and three major “benchmark” laws. The national government is sharing oil revenues with the provinces. And many economic indicators in Iraq—from oil production to inflation—are now pointed in the right direction.

This is the sort of presidential spin to which we’ve grown accustomed. And, yes, Iraq’s security situation has improved of late, notwithstanding the recent battles in Baghdad and Basra and a renewed series of Al Qaeda bombings. But as rosy a picture as President Bush would like to paint, a growing number of strategic thinkers in the Pentagon are reaching far different conclusions. Among them is Joseph J. Collins, a former deputy assistant secretary of defense for stability operations, currently a professor of national security strategy at the National War College. Collins is the author of a study (.pdf) released yesterday by the National Institute for Strategic Studies (and first reported by McClatchy), which, in direct contradiction of the President’s recent remarks, calls the Iraq War as a “major debacle” and describes its outcome as “in doubt.”

More after the jump…

Measured in blood and treasure, the war in Iraq has achieved the status of a major war and a major debacle. As of fall 2007, this conflict has cost the United States over 3,800 dead and over 28,000 wounded. Allied casualties accounted for another 300 dead. Iraqi civilian deaths—mostly at the hands of other Iraqis—may number as high as 82,000. Over 7,500 Iraqi soldiers and police officers have also been killed. Fifteen percent of the Iraqi population has become refugees or displaced persons…

The war’s political impact also has been great. Globally, U.S. standing among friends and allies has fallen. Our status as a moral leader has been damaged by the war, the subsequent occupation of a Muslim nation, and various issues concerning the treatment of detainees… Our Armed Forces—especially the Army and Marin Corps—have been severely strained by the war in Iraq. Compounding all of these problems, our efforts there were designed to enhance U.S. national security, but they have become, at least temporarily, an incubator for terrorism and have emboldened Iran to expand its influence throughout the Middle East.

As this case study is being written, despite impressive progress in security during the surge, the outcome of the war is in doubt. Strong majorities of both Iraqis and Americans favor some sort of U.S. withdrawal. Intelligence analysts, however, remind us that the only thing worse than an Iraq with an American army may be an Iraq after the rapid withdrawal of that army… No one has calculated the psychopolitical impact of a perceived defeat on the U.S. reputation for power or the future of the overall war on terror. For many analysts (including this one), Iraq remains a “must win,” but for many others, despite the obvious progress under General David Petraeus and the surge, it now looks like a “can’t win.”

The report goes on to criticize Donald Rumsfeld for insisting on a smaller invasion force and “questioning, delaying or deleting units on the numerous deployment orders that came across his desk.” It also calls out Condoleezza Rice and Stephen Hadley, Bush’s wartime national security advisors, claiming that “senior national security officials exhibited in many instances an imperious attitude, exerting power and pressure where diplomacy and bargaining might have had a better effect.”