What’s that, kids? You want grandpa to tell you what a record store is? Well, imagine an iTunes you can actually walk around in. Neat, thanks Grandpa! Now bring Grampy his illegal Pall Malls. And, scene. Ahem. Few brick-and-mortar shops have suffered as much in the wake of the intertubes as have independent record stores: the NY Times reports over 3,000 have closed in the last five years, half of them independent. Tomorrow, in what can be viewed as either an innovative attempt to spark renewed interest in the neighborhood vinyl emporium or as a desperate plea for help, a consortium of music retailers will present Record Store Day, with all sorts of events to draw people in. Manhattan’s Other Music will play host to “celebrity” DJs from bands like Grizzly Bear and Deerhunder, while closer to home, Metallica will perform at Rasputin’s in Mountain View, and Jello Biafra will work the “help desk” at Amoeba in San Francisco. Plus, bands like R.E.M. and Vampire Weekend are selling vinyl singles available for one day only. Fun! But will it save the record store? 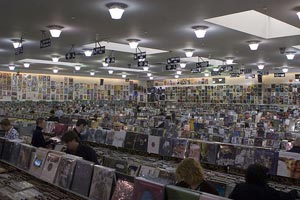 As the Times reports, even “success stories” like Virgin Megastore have closed 17 locations since 1999, and a Lower Manhattan stalwart, the Downtown Music Gallery, may soon be forced to move to Queens. The most successful stores either focus on a niche, like vinyl 12″ singles for DJs, or are massive cultural institutions, like Amoeba (pictured at right). Personally, I’ve always had terrible luck finding records I’m looking for, whether they’re classic albums or hot new tracks. Some of the little ma-and-pa stores were laid out so terribly that searching through their dusty stacks was an exercise in futility: I’m talking to you, Record Finder. The internet, soulless as it may be, has been my savior as a DJ, since I can grab stuff the instant it comes out, and it could be argued that the instantaneous sharing of tunes from disparate locations is responsible for the current joyful diversity of cross-pollinating musical trends, from baile funk to cumbia, from J-Pop to to Malian blues. Sure, there’s something to be said for the tactile quality of a record store, where you see the full-sized cover art, and maybe find something unexpected. But I run across just as many surprises from personal recommendations on the blogosphere. So, sure, I’ll join everybody at Amoeba tomorrow, and I’ll stop by Aquarius just to see what’s playing on the in-store stereo. But I won’t mourn the passing of those junky, half-hearted storefronts, filled with terrible, depressing old Emerson Lake & Palmer records—Palms Out Sounds beats that any day.