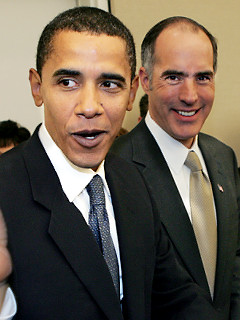 Touring across Pennsylvania Monday, Barack Obama largely eschewed the daily back and forth of the campaign and refocused on the reasons he entered the presidential race over one year ago. Speaking to a small group of voters at a community college outside of Philadelphia, Obama said he decided to run because he thought the “country was ready for a different kind of politics.” He talked about the obvious: the economy, the war, and the energy crisis. And he got even more detailed, discussing skyrocketing autism rates, working conditions for nurses, and net neutrality as an engine for innovation. The vagaries of the campaign season were left behind, perhaps because with one day before voters headed to the polls, the controversies and “manufactured issues” had been addressed and had taken whatever tool they would take. It was time to get back to basics.

In McKeesport, a town near Pittsburgh with a declining population and a disappearing manufacturing base, Obama reintroduced himself. “I have been running for 15 months now,” he said. “When I first announced, people asked me, ‘Why are you running so soon? You’re a young man. You can afford to wait.’ And I said, ‘I’m not running because of some long-held ambition or because I think it’s my turn. I’m running because of what Dr. King called the ‘fierce urgency of now.'” He slammed lobbyists and special interests, saying they had a “headlock” on the nation’s politics. He said he wanted to “change the culture in Washington.” But for a few missing chants (“Fired up and ready to go!” has been left behind), it was the same speech he had delivered in the snowy cornfields of Iowa, home of the first primary.

Obama briefly addressed the new Hillary Clinton ad that features Osama bin Laden, dismissing it as politics as usual. But he did not bother to refer to the so-called “Bitter-gate.” But at his rallies, there were voters who identified themselves as bitter. A local man named Roy Kelley who worked in a local hospital for 38 years said that he agreed with the comments that got Obama into trouble. “It is bitter,” he said. “I feel bitter. I come from McKeesport here. You drive through this area, you start at Braddock, you come through McKeesport, Duquesne, Glassport, all these cities here. Presidents and Congress come through this area and make promises and nothing ever changes.” Kelley felt Obama could deliver where other presidents had failed. “I drive through this town everyday, it makes me cry—what it was and what it looks like now. It pains me every day. My daughter, I mean, I want her to move out of this area. There’s nothing here for her.”

What was here for him when he was her age? “Steel mills. There were stores, you know. You could walk up and down the streets and go into any kind of store. Now it’s gone, it’s tore down. There’s nothing here for us.”

Paul Shelly, a McKeesport City councilman wearing an Obama t-shirt with the sleeves cut off and painted-stained denim shorts, echoed Kelley’s feelings. “If you know this valley where basically our steel industry left in 1982, you know that’s made the whole valley angry and frustrated,” he said. “There’s no more opportunity here.”

Obama’s final event of the day was aimed a different crowd. The estimated 10,000 rabid University of Pittsburgh students who crammed into the Petersen Events Center were too young to be bitter yet, or to remember the once vibrant blue-collar economy that gave birth to Pittsburgh and its environs. But they were as loud, or louder, than the crowd in McKeesport.

Perhaps the biggest roar of the night came when Senator Bob Casey said, in his introduction of Obama, “Are you ready to change America?” Critics would say that Casey’s line was empty (and now well-worn) words short of specifics. For instance, when Governor Ed Rendell, a Clinton supporter, told a group of college students that by supporting Obama they “drink the Kool-aid”, he was suggesting that they were being played for change-loving fools unable to discern reality from rhetoric.

But Rendell misses the point. In that auditorium, there were 10,000 young people who actually believed they could change America. Afterwards, the crowd was abuzz. No one seemed to care or know what the details of reform were — it was the possibility of change, the power to change, that was intoxicating.

The political tit-for-tat that consumes so much of TV news, the op-eds, the debates, and the blogosphere was MIA in Pennsylvania right before the voting. Instead, there were thousands of voters, particularly young voters, who felt empowered. Obama’s ability to motivate, uplift and inspire voters has been the driving force of his campaign. In recent weeks, all that had been shoved aside in the media debate by real and not-so-real controversies. Now it’s time to see what really matters more to voters.