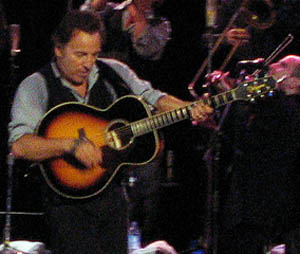 Just as Senator Barack Obama’s connection to working-class voters is being questioned (unfairly) by Senator Hillary Clinton and Senator John McCain (two true populists, right?), the Bard of the Blue-collar America, Bruce Springsteen, has endorsed Barack Obama, declaring that Obama “speaks to the America I’ve envisioned in my music.” Prior to the start of the Democratic primaries, Springsteen was not jazzed by anyone in the Democratic race, according to a source quite close to him. But the Jersey boy has now jumped in with a full power chord, at an important moment in the race. It’s doubtful his endorsement–or that of any singer, celebrity, artist, writer or intellectual–can shift large number of voters. But it’s sure better to have the Boss on your side that against you.

Like most of you, I’ve been following the campaign and I have now seen and heard enough to know where I stand. Senator Obama, in my view, is head and shoulders above the rest.

He has the depth, the reflectiveness, and the resilience to be our next President. He speaks to the America I’ve envisioned in my music for the past 35 years, a generous nation with a citizenry willing to tackle nuanced and complex problems, a country that’s interested in its collective destiny and in the potential of its gathered spirit. A place where “…nobody crowds you, and nobody goes it alone.

At the moment, critics have tried to diminish Senator Obama through the exaggeration of certain of his comments and relationships. While these matters are worthy of some discussion, they have been ripped out of the context and fabric of the man’s life and vision, so well described in his excellent book, Dreams of My Father, often in order to distract us from discussing the real issues: war and peace, the fight for economic and racial justice, reaffirming our Constitution, and the protection and enhancement of our environment.

After the terrible damage done over the past eight years, a great American reclamation project needs to be undertaken. I believe that Senator Obama is the best candidate to lead that project and to lead us into the 21st Century with a renewed sense of moral purpose and of ourselves as Americans.

Over here on E Street, we’re proud to support Obama for President.