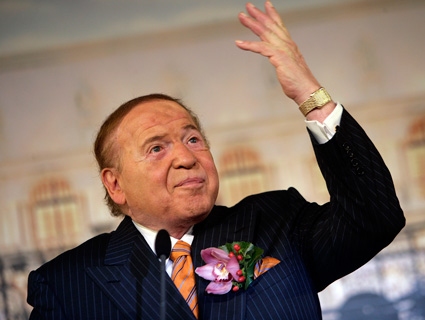 In Las Vegas casino mogul Sheldon Adelson, foreign-policy hawks thought they had found the conservative answer to liberal philanthropist George Soros: a deep-pocketed benefactor eager to dole out generous sums to right-leaning advocacy groups and grassroots campaigns. Adelson’s largesse, they believed, would underwrite the further advancement of conservative causes—particularly those regarding national security—and allow conservatives to do well-financed battle with ideological adversaries such as MoveOn.org.

Conservatives, of course, have long had a well-established network of think tanks, which have produced influential monographs such as the one that became the basis of the Bush administration’s Iraq surge strategy. And well-funded organizations on the right like the Swift Boat Veterans for Truth have mounted successful campaigns against Democrats. Nevertheless, conservatives in Washington have felt they lacked a comprehensive network of issue-advocacy, grassroots, and campaign groups that could influence the 2008 election and rally public opinion to support their national security agenda over the long term. So last year, when Adelson helped to establish Freedom’s Watch, a group that late last summer launched a $15 million media campaign in support of the U.S. troop surge in Iraq, hopes were high—both for Adelson and for Freedom’s Watch. As former White House press secretary and Freedom’s Watch official Ari Fleischer put it in August, “The cavalry is coming.”

Almost eight months later, some Freedom’s Watch watchers are wondering whether some of the cavalry got lost. Even as the group has mounted a new campaign to coincide with General David Petraeus’ testimony on Iraq to Congress this week, there has been conservative grumbling about Freedom’s Watch—and Adelson. And several Freedom’s Watch staffers, including its first president, Bradley Blakeman, have left the group. Now Washington conservatives are worrying that Adelson may not be the white knight they had wished for.

In not-for-attribution interviews, a few conservative think tank hands and activists expressed frustration that Freedom’s Watch has yet to develop a comprehensive strategy, and they gripe that it has been slow to set up a MoveOn-style infrastructure. Freedom’s Watch hasn’t realized its full potential, they say, in part because Adelson overly involves himself in the group’s decision-making and won’t heed the good advice of…well, people like them.

“He is both meddlesome and attached to his own agenda,” says a conservative think tanker. “And he is not listening to people who are giving him good political and strategic advice.… Everyone I know comes away very frustrated from their experience” with Freedom’s Watch. “They are late to the game and they need to recognize that,” he adds. “MoveOn has had a microphone to itself for a number of years. Freedom’s Watch is not entirely ineffective, but they are not well organized or maximizing their impact.” (Conservatives may be too obsessed with MoveOn to realize that it’s a membership-based organization and not a precise model for a top-down outfit like Freedom’s Watch.)

Other conservative activists raised similar points. “You have people like Ari Fleischer on the board of Freedom’s Watch saying ‘the cavalry is coming,’ and a lot of groups who think they have important work to do on various issues who have, of course, come to [Adelson] with proposals,” says a source familiar with Freedom’s Watch. “Freedom’s Watch doesn’t have an executive director at the moment, and I don’t see what capabilities it has set up.”

Conservatives seem to be experiencing Soros envy, believing—rightly or not—that a well-heeled left has out-organized them. “The fact is this [liberal] network, it goes all the way from MoveOn to trial lawyers to the Center for American Progress: The left has all this set up, a very sophisticated structure,” this source says.

Freedom’s Watch spokesman Ed Patru declined to comment on conservative discontent with the group or discuss its upcoming plans: “I am not going to get into a discussion based on background sources about what our strategy is.”

Conservatives are apparently frustrated not only because Freedom’s Watch, which both engages in policy advocacy and makes grants to like-minded outfits, has not become the right’s MoveOn, but also because it has not yet turned into what they believe is an effective ATM for their projects. “To make it successful would require a very experienced and savvy manager, someone who understands the think tank and advocacy communities, the philanthropic community, and probably knows a lot about politics, policy, and communications,” says the source familiar with Freedom’s Watch. “Such individuals are rare.”

In his rise from the working-class son of a Boston cabbie to a Las Vegas trade-show impresario and casino mogul, Adelson demonstrated a hands-on and forceful manner that some conservative policy advocates now find difficult to deal with. A series of legal filings in lawsuits against Adelson by former business associates depict a man bullheaded in his business pursuits—and willing to play ugly when necessary. As reported by the Israeli newspaper Haaretz in February, one breach-of-contract lawsuit against Adelson, citing a deposition by an Adelson business partner, alleges that in 2001 he agreed to use his Republican political contacts to derail a congressional resolution that opposed holding the 2008 Olympic Games in Beijing. The suit filed on behalf of Hong Kong businessman Richard Suen alleges that, in return, Chinese officials agreed to give Adelson licenses to open casinos in Macau. In February 2002, he received his first license, and today his Las Vegas Sands Corporation is among the largest foreign investors in China. (Adelson’s extensive dealings in China may raise questions for his hawkish beneficiaries in Washington, many of whom perceive the country as the United States’ most significant rival for political and military power in the 21st century.)

“He’s a very aggressive, strong-minded, passionate person,” says a Nevada Republican operative who has dealt with Adelson. The conservative think-tank hand says, “Look, like a lot of really rich people, for a very good reason, Adelson has a very high opinion of himself. I would ask the question whether the weaknesses of the organization [Freedom’s Watch] are a reflection of the man.”

Recent efforts by Iranian human rights and anti-regime activists to solicit support from Adelson and Freedom’s Watch—its website lists rallying public opinion against the Iranian regime as a top goal—offers some insight into conservative disappointment with the group. Banafsheh Zand-Bonazzi is one of several Iranian activists who have sought support from Freedom’s Watch. In December, she says, she submitted an application to the group requesting funding for an effort to promote the study of secular Islam and Islamic reform. She says her longtime friend Michael Ledeen, the well-known neoconservative and American Enterprise Institute scholar, attempted to help her get funding from Adelson and Freedom’s Watch, but Ledeen’s efforts were to no avail. “[Ledeen] was pulling his hair out,” Zand-Bonazzi says, explaining that he was frustrated that Freedom’s Watch kept providing conflicting information about what it wanted to fund and how it would evaluate requests.

“Lots of people are trying to help Adelson spend his money,” says the conservative think-tank hand. “Ledeen’s been making big efforts on that front.” (Ledeen did not respond to requests for comment.)

Freedom’s Watch declines to reveal all the projects it supports. An official there indicated the group has “partnered” with other organizations such as pro-war blog Blackfive and the Foundation for the Defense of Democracies on individual projects. “FDD and Freedom’s Watch have worked cooperatively on such issues as [supporting] the Petraeus mission (along with many other pro-Petraeus groups),” says Foundation for the Defense of Democracies president Clifford May, a former Republican National Committee spokesman and onetime New York Times journalist. According to a Washington think-tank official, FDD applied for a $3 million grant from Adelson or Freedom’s Watch to support its Iran projects. Asked about this, May said, “I go to many philanthropists and foundations to try to get the resources we need to do the work we think is important.”

Beyond Freedom’s Watch, Adelson has been financing other conservative and philanthropic activity. In 2006, his private Adelson Family Foundation pledged to donate $200 million of his estimated $28 billion fortune annually. According to the National Journal, Adelson recently contributed $2 million to Defense of Democracies, an FDD-linked group, which funded an ad blitz blasting domestic surveillance legislation backed by House Democrats. (The bill omitted a White House demand for retroactive immunity for telecommunications companies that handed over customer data to the government without warrants.) In 2006, Adelson provided $1 million to American Solutions for Winning the Future, a political group formed by former Republican House speaker Newt Gingrich, now a senior fellow at the American Enterprise Institute. In April 2007, the Jerusalem-based Shalem Center, headed by former Soviet dissident Natan Sharansky, announced that it had received a $4.5 million gift from Adelson’s foundation . The 74-year-old Adelson and his wife contributed more than a million dollars to mostly Republican politicians and PACs between 1993 and 2007.

Last year, Adelson helped sponsor a democracy promotion conference in Prague that was attended by President George W. Bush. As part of his presidential library, Bush intends to create a “Freedom Institute” in Dallas after he leaves office, and one Adelson acquaintance suggests it, too, could receive financial support from Adelson. “Fundraising efforts have not really begun,” says Taylor Griffin, a spokesman for the George W. Bush Presidential Library Foundation, when asked if Adelson will support the institute. And Miriam J. Katz, a senior grants officer at the Adelson Family Foundation, says, “We do not respond to inquiries from the press.”

Adelson’s conservative critics note that the issue is not that he is insufficiently generous with his wealth. But he’s not yet given them the improved conservative network they desire. In spite of—or because of—discontent with the group’s recent efforts, Freedom’s Watch has taken steps to refocus its operations. Last week the group announced that it had hired veteran GOP operative Carl Forti, the former political director of Mitt Romney’s failed presidential campaign and a longtime official at the National Republican Campaign Committee, to head its 2008 issue advocacy campaign—that is, its effort to use national security issues to defeat Democrats and to elect Republicans, including John McCain. And there’s still time for Adelson’s cavalry to arrive and do battle in the fall campaign.