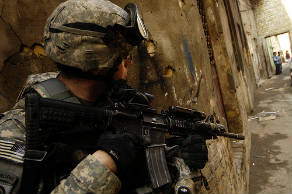 Senior officers from the nation’s four military branches testified before the Senate Armed Services Committee yesterday, where the U.S. Army and Marine Corps—the two branches that have borne the brunt of the fighting in Iraq and Afghanistan—warned that the current operational tempo is straining their capabilities to the breaking point.

The stronger warning came from General Richard A. Cody, the Army’s vice chief of staff, who characterized the Army’s current stress level as “a significant risk” to the future of the all-volunteer military. From his prepared statement (.pdf):

Today’s Army is out of balance. The current demand on our forces in Iraq and Afghanistan exceeds the sustainable supply and limits our ability to provide ready forces for other contingencies… Current operational requirements for forces and insufficient time between deployments require a focus on counterinsurgency training and equipping to the detriment of preparedness for the full range of military missions.

Equipment used repeatedly in harsh environments is wearing out more rapidly than programmed. Army support systems, designed for the pre-9/11 peacetime Army, are straining under the accumulation of stress from six years at war. Overall, our readiness is being consumed as fast as we build it. If unaddressed, this lack of balance poses a significant risk to the All-Volunteer Force and degrades the Army’s ability to make a timely response to other contingencies.

General Robert Magnus, the assistant commandant of the Marine Corps, struck a more positive note at the beginning of his testimony, assuring lawmakers that “with your continuing support, we will remain the Nations’ premiere expeditionary force in readiness—most ready when the Nation is least ready.” But Magnus proceeded to outline many of the same concerns (.pdf) voiced by his Army colleague:

Due to the continued high demand for Marine forces, our non-deployed units are consistently stressed by the requirement to send their leadership personnel as individual augmentees for transition teams, joint headquarters, and other requirements in support of Operations Iraqi Freedom (OIF) and Enduring Freedom (OEF)…

Contributing to the stress on our force is the short dwell time between deployments and a necessarily intense focus on counter-insurgency operations… The short dwell time available at home does not allow our units the time to train to the full spectrum of missions needed to be expeditiously responsive for other contingencies… Additionally, the need for units such as artillery, mechanized maneuver and air defense units to train and conduct ‘in lieu of missions’ (such as security, military policing, and civil affairs) degrades the readiness of those units to conduct their regular primary mission. While the result is a Marine Corps well trained for ongoing operations in Afghanistan and Iraq, there is significant risk in our degraded ability to support other operations, including major combat operations where those primary mission, full spectrum capabilities would be required.

In other words, all this focus on killing terrorists and putting down insurgencies is detracting from the Marines’ readiness to storm Pacific beaches when the war with China comes along. (Remember that?!) Together, Cody and Magnus’ testimony highlights the stark differences of opinion between military branch commanders and their generals in the field, like David Petraeus, over whether the current ‘surge’ strategy in Iraq is sustainable and the deeper impact it may or may not have on the long-term readiness of U.S. forces. The issue is sure to figure prominently in Petraeus’ upcoming testimony before Congress, where the general can be expected to downplay the warnings issued yesterday.

Photo used under a Creative Commons license from soldiersmediacenter.