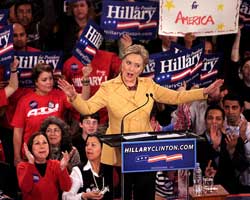 Why is Hillary Clinton still in the race?

Ever since she failed to cream Barack Obama in Indiana, pundits and analysts have been chewing this over–and now that the West Virginia primary is done, even though she won by a more than two-to-one margin, the question still hovers. After all, Obama has racked up an insurmountable lead in pledged delegates and has pulled ahead in the superdelegate count, meaning the race is essentially complete. Clinton and her campaign advisers have argued that she can still win the nomination if she does well in the last few primaries and then persuades superdelegates she is the better candidate to do battle with John McCain. But the superdelegates don’t seem receptive to her case. And the fact that she has throttled back on the anti-Obama rhetoric in recent days–she barely criticized him in her not-so-jubilant West Virginia victory speech–is a signal that she may not believe her own spin and is merely halfheartedly trudging toward the last primaries (Montana and South Dakota) on June 3.

Yet there she is–an active and hard-working candidate. And the commentators have come up with several obvious explanations:

* She wants to remain in the hunt just in case something happens. (A video appears of Wright calling for armed revolution? Fox News produces Obama’s Secret Muslim Membership card?)

* She is staying in for one last round of fundraising. (Her campaign is $20 million in debt and owes her $11 million.)

* She wants to end her historic campaign with a string of victories: West Virginia, Kentucky, and Puerto Rico. (Puerto Rico? She is a senator from New York.)

* And the most obvious of them all: she’s not yet ready to face the music.

No doubt, a combo of these rationales is fueling Clinton’s impossible ride. But let me add one more to the mix: Clinton is setting up the biggest I-told-you-so in recent American political history.

Assume Obama is the nominee and imagine that he loses to McCain in the fall. Where would that leave Clinton? She would be able to wag her finger at her party, and she wouldn’t even have to say those haughty words. She and her die-hard confederates would be able to note simply and smugly, We did try to warn you. In the following four years, they would remind reporters, party leaders, Democratic voters, and everyone else, over and over, that they had said that Obama was unelectable, that they had said he could not win blue-collar (that is, white) voters. This Clinton chorus would not cease singing this song for a nanosecond. Can’t you just see Bill Clinton and Terry McAuliffe lecturing cable news hosts on this point? Hiding their schadenfreude–just barely–they would note that they had won the fundamental argument of 2008: who understands American voters the best? And in this scenario, Hillary Clinton would be well-positioned for 2012. In fact, she would have such bragging rights as to be able to question any other Democrat’s entry into the presidential contest. She might even expect the party this time to hand her the nomination on a platter–accompanied with one big apology.

This is not to say that Hillary Clinton is wishing for an Obama defeat in November. And there’s little doubt that she will campaign fiercely and enthusiastically for Obama–if only to preserve her standing in the party and to earn good will among his devotees. But like any good politician, she now has to consider all the possibilities, all the angles. And as she determines what to do here and now, she must consider what an Obama loss would mean for her own political future.

Under the most reasonable set of assumptions, the 60-year-old Clinton’s presidential ambitions can only survive if Obama falls to McCain. (She can run again in 2012, but seeking the presidency in 2016–when she would be 69 by the general election–would be rather tough.) Consequently, she must factor into her current decisionmaking what actions would best serve her should Obama fail in November.

By staying in the race, Clinton has been–and will be–able to pocket more of those blue-collar voters. And with a decisive win in Puerto Rico on June 1, she could cut into Obama’s edge in the popular vote. Even if she has no shot at coaxing superdelegates with her blue-collar argument, she will be bolstering her you-should’ve-listened-to-me argument, in case the voters in the general election send Obama packing.

The final third of the Democratic primary contest has been dominated by questions related to blue-collar voters. Can Obama win them? If not in the primaries, then in the fall? Will white working-class Americans vote for a black Democrat? How important are they to the Democrats’ prospects in the general election? Can a Democrat win without most of them? Are the Obama strategists correct when they assert their candidate can expand the Democrats’ electorate–which would render white working-class voters not as important for the Democratic nominee as they have been in the past?

The Clinton camp has contended that white, lunch-pail voters are essential to Democratic victory in critical states, such as Ohio and Pennsylvania. And Clinton has promised that she will win West Virginia in the general election if she is her party’s nominee, noting that no Democrat in recent decades has won the White House without bagging the Mountain State. (As if she can make such a promise.) But by winning West Virginia and Kentucky (which holds its primary on May 20), she can solidify her standing as the Dem preferred by white, blue-collar voters. And if Obama falls short on November 4, she will have all those voters standing behind her when she says….well, you know.

So remaining in the race may be more than just a matter of pride, money, or desire. It may be a calculation that looks past 2008 and to Hillary Clinton’s next big thing.