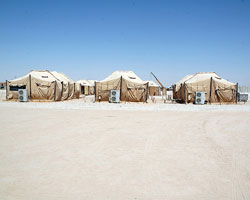 Allegations of widespread mismanagement and corruption among private contractors in Iraq are nothing new; if anything, tales of cronyism, over-billing, and embezzlement have become so frequent that our national tolerance for them seems only to have increased as the Iraq War has drawn on. Even so, the testimony earlier this week of three whistleblowers before the Senate’s Democratic Policy Committee (DPC) stands out for the sheer outrageousness of their accusations—namely that U.S. private contractors looted Iraqi palaces and ministries, stole military equipment, fenced supplies destined for U.S. troops, and even operated a prostitution ring that may have contributed to the death of fellow contractor. Yet despite its focus on such salacious matters as sex and corruption, the session earned little media attention.

The first to testify was Frank Cassaday, a former KBR employee who worked as an ice plant operator in Fallujah in 2004 and 2005. “Ice was a very valuable commodity in Iraq that was regularly stolen and bartered for other goods,” he told the committee. He recalled how a convoy of U.S. Marines, in preparation for an operation that would take them outside the wire for several days, requested 28 bags of ice to keep their food fresh in the desert heat. They received only three. “The ice foreman was cheating the troops out of ice at the same time that he was trading the ice for DVDs, CDs, food, and other items at the Iraqi shops across the street,” Cassaday said. “This foreman would change the ice tally sheets at the distribution area I worked in to make it seem as though we had handed out more ice to the Marines than we actually did.”

Cassaday said he later observed his colleagues returning to KBR’s camp with equipment they had stolen from the U.S. military, including refrigerators, artillery round detonators, two rocket launchers, and about 800 rounds of small arms ammunition. After he informed the KBR camp manager of the thefts, Marines searched the camp with dogs to recover the stolen property. For his trouble, Cassaday said, KBR security officers jailed him in his tent for two days. He then spent another four days in “protective custody” before being transferred, against his will, to work in a laundry.

The practice of stealing equipment and supplies destined for the U.S. military was so pervasive that KBR employees invented a slang term to describe it: “drug deals.” But thefts were not limited to military supplies, said Linda Warren, another former KBR employee who testified at the hearing. Upon her arrival in Baghdad in 2004, she was shocked by the number of contractors involved in criminal activity. “KBR employees who were contracted to perform construction duties inside palaces and municipal buildings were looting,” she said. “Not only were they looting, but they had a system in place to get contraband out of the country so it could be sold on eBay. They stole artwork, rugs, crystal, and even melted down gold to make spurs for cowboy boots.” Like Cassaday, when she complained to her superiors about the thefts, she was punished. She said her vehicle was taken away, her movements were closely monitored, and her access to phones and the Internet were cut off. Eventually, she was transferred out of Baghdad.

Perhaps more shocking than any of this was the accusation from Barry Halley, a former project manager for Worldwide Network Services, a Washington, D.C.-based firm that was working on subcontract for DynCorp. According to Halley, his site manager in Iraq, who he said was employed by a “major defense contractor,” moonlighted as the leader of a prostitution ring serving American contractors in Iraq that indirectly caused the death of a colleague. “A co-worker unrelated to the ring was killed when he was traveling in an unsecure car and shot performing a high-risk mission,” he told the committee. “I believe that my co-worker could have survived if he had been riding in an armored car. At the time, the armored car that he would otherwise have been riding in was being used by a manager to transport prostitutes from Kuwait to Baghdad.” The prostitution ring was shut down when the company’s home office learned of it, but, Halley said, the manager who controlled it retained his job, moving on to work another contract in Haiti.

A theme running through all three witnesses’ testimony, aside from the pervasiveness of corruption among private contractors in Iraq, was that blowing the whistle on abuses rarely did any good. As is often the case with whistleblowers, speaking out was a shortcut to getting fired or demoted. “There’s a no-talk, no-speak policy in effect in Iraq about what goes on,” Halley said.

According to Cassaday, although contractors for KBR are trained to report irregularities, the practice is generally frowned on by managers in the field. “In Houston at the training camp that I was at for two weeks before we went over to Iraq, they told us that, ‘Our door is always open. If you have a problem, just come on in,'” he said. “But what they don’t tell you is there’s a back door to that office. If you come in and you complain about something, you’re going to be going out that back door. You’re going to either be transferred someplace you don’t want to be, or you’re going to be fired.”

Arriving nearly two weeks after the military awarded a 10-year logistical contract worth up to $150 billion to DynCorp, KBR, and a third firm, the DPC hearing was the thirteenth in a series designed to look into contractor fraud and abuse in the reconstruction of Iraq. Although, as a partisan committee, it has no powers to pass legislation, DPC members do refer allegations to the Department of Justice and the Pentagon’s Inspector General for further investigation, says Barry Piatt, the DPC’s communications director. Committee chairman Senator Byron Dorgan of North Dakota has been advocating for the creation of a permanent, bipartisan Wartime Contracting Commission to look into the types of accusations raised this week, but so far, says Piatt, Senate Republicans have blocked the measure. Until he is able to obtain the necessary 60 votes, Dorgan will continue to negotiate with the opposition in hopes of peeling away enough support to establish the commission. In the meantime, “the hearings that need to be done will be done,” says Piatt. “The Republicans won’t able to block that, and by continuing to do them, [Senator Dorgan] is showing the work that a committee like that would do.”