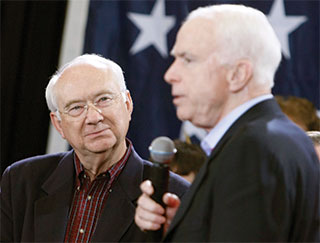 Who’s to blame for the biggest financial catastrophe of our time? There are plenty of culprits, but one candidate for lead perp is former Sen. Phil Gramm. Eight years ago, as part of a decades-long anti-regulatory crusade, Gramm pulled a sly legislative maneuver that greased the way to the multibillion-dollar subprime meltdown. Yet has Gramm been banished from the corridors of power? Reviled as the villain who bankrupted Middle America? Hardly. Now a well-paid executive at a Swiss bank, Gramm cochairs Sen. John McCain’s presidential campaign and advises the Republican candidate on economic matters. He’s been mentioned as a possible Treasury secretary should McCain win. That’s right: A guy who helped screw up the global financial system could end up in charge of US economic policy. Talk about a market failure.

Gramm’s long been a handmaiden to Big Finance. In the 1990s, as chairman of the Senate banking committee, he routinely turned down Securities and Exchange Commission chairman Arthur Levitt’s requests for more money to police Wall Street; during this period, the sec‘s workload shot up 80 percent, but its staff grew only 20 percent. Gramm also opposed an sec rule that would have prohibited accounting firms from getting too close to the companies they audited—at one point, according to Levitt’s memoir, he warned the sec chairman that if the commission adopted the rule, its funding would be cut. And in 1999, Gramm pushed through a historic banking deregulation bill that decimated Depression-era firewalls between commercial banks, investment banks, insurance companies, and securities firms—setting off a wave of merger mania.

But Gramm’s most cunning coup on behalf of his friends in the financial services industry—friends who gave him millions over his 24-year congressional career—came on December 15, 2000. It was an especially tense time in Washington. Only two days earlier, the Supreme Court had issued its decision on Bush v. Gore. President Bill Clinton and the Republican-controlled Congress were locked in a budget showdown. It was the perfect moment for a wily senator to game the system. As Congress and the White House were hurriedly hammering out a $384-billion omnibus spending bill, Gramm slipped in a 262-page measure called the Commodity Futures Modernization Act. Written with the help of financial industry lobbyists and cosponsored by Senator Richard Lugar (R-Ind.), the chairman of the agriculture committee, the measure had been considered dead—even by Gramm. Few lawmakers had either the opportunity or inclination to read the version of the bill Gramm inserted. “Nobody in either chamber had any knowledge of what was going on or what was in it,” says a congressional aide familiar with the bill’s history.

It’s not exactly like Gramm hid his handiwork—far from it. The balding and bespectacled Texan strode onto the Senate floor to hail the act’s inclusion into the must-pass budget package. But only an expert, or a lobbyist, could have followed what Gramm was saying. The act, he declared, would ensure that neither the sec nor the Commodity Futures Trading Commission (cftc) got into the business of regulating newfangled financial products called swaps—and would thus “protect financial institutions from overregulation” and “position our financial services industries to be world leaders into the new century.”

Subprime borrower: Has a few overdue credit card bills; goes to a storefront lender owned by major bank; takes out a $100,000 home-equity loan at 11 percent interest

Lending bank: Assuming housing prices will only go up, and that investors will want to buy mortgage loan packages, makes as many subprime loans as it can

Investment bank: Packages subprime mortgages into bundles called collateralized debt obligations, or cdos, then sells those cdos to eager investors. Goes to insurer to get protection for those investors, thus passing the default risk to the insurer through a “credit default swap.”

Insurer: Thinking that default risk is low, agrees to cover more money than it can pay out, in exchange for a premium

Rating agency: On basis of original quality of loans and insurance policy they are “wrapped” in, issues a rating signaling certain slices of the cdo are low risk (aaa), medium risk (bbb), or high risk (ccc)

Investor: Borrows more money from investment bank to load up on cdo slices; makes money from interest payments made to the “pool” of loans. No one loses—as long as no one tries to cash in on the insurance.

It didn’t quite work out that way. For starters, the legislation contained a provision—lobbied for by Enron, a generous contributor to Gramm—that exempted energy trading from regulatory oversight, allowing Enron to run rampant, wreck the California electricity market, and cost consumers billions before it collapsed. (For Gramm, Enron was a family affair. Eight years earlier, his wife, Wendy Gramm, as cftc chairwoman, had pushed through a rule excluding Enron’s energy futures contracts from government oversight. Wendy later joined the Houston-based company’s board, and in the following years her Enron salary and stock income brought between $915,000 and $1.8 million into the Gramm household.)

But the Enron loophole was small potatoes compared to the devastation that unregulated swaps would unleash. Credit default swaps are essentially insurance policies covering the losses on securities in the event of a default. Financial institutions buy them to protect themselves if an investment they hold goes south. It’s like bookies trading bets, with banks and hedge funds gambling on whether an investment (say, a pile of subprime mortgages bundled into a security) will succeed or fail. Because of the swap-related provisions of Gramm’s bill—which were supported by Fed chairman Alan Greenspan and Treasury secretary Larry Summers—a $62 trillion market (nearly four times the size of the entire US stock market) remained utterly unregulated, meaning no one made sure the banks and hedge funds had the assets to cover the losses they guaranteed.

In essence, Wall Street’s biggest players (which, thanks to Gramm’s earlier banking deregulation efforts, now incorporated everything from your checking account to your pension fund) ran a secret casino. “Tens of trillions of dollars of transactions were done in the dark,” says University of San Diego law professor Frank Partnoy, an expert on financial markets and derivatives. “No one had a picture of where the risks were flowing.” Betting on the risk of any given transaction became more important—and more lucrative—than the transactions themselves, Partnoy notes: “So there was more betting on the riskiest subprime mortgages than there were actual mortgages.” Banks and hedge funds, notes Michael Greenberger, who directed the cftc‘s division of trading and markets in the late 1990s, “were betting the subprimes would pay off and they would not need the capital to support their bets.”

These unregulated swaps have been at “the heart of the subprime meltdown,” says Greenberger. “I happen to think Gramm did not know what he was doing. I don’t think a member in Congress had read the 262-page bill or had thought of the cataclysm it would cause.” In 1998, Greenberger’s division at the cftc proposed applying regulations to the burgeoning derivatives market. But, he says, “all hell broke loose. The lobbyists for major commercial banks and investment banks and hedge funds went wild. They all wanted to be trading without the government looking over their shoulder.”

Now, belatedly, the feds are swooping in—but not to regulate the industry, only to bail it out, as they did in engineering the March takeover of investment banking giant Bear Stearns by JPMorgan Chase, fearing the firm’s collapse could trigger a dominoes-like crash of the entire credit derivatives market.

No one in Washington apologizes for anything, so it’s no surprise that Gramm has failed to issue any mea culpa. Post-Enron, says Greenberger, the senator even called him to say, “You’re going around saying this was my fault—and it’s not my fault. I didn’t intend this.”

Whether or not Gramm had bothered to ponder the potential downsides of his commodities legislation, having helped set off an industry free-for-all, he reaped the rewards. In 2003, he left the Senate to take a highly lucrative job at ubs, Switzerland’s largest bank, which had been able to acquire investment house PaineWebber due to his banking deregulation bill. He would soon be lobbying Congress, the Fed, and the Treasury Department for ubs on banking and mortgage matters. There was a moment of poetic justice when ubs became one of the subprime crisis’ top losers, writing down $37 billion as of this spring—an amount equal to its previous four years of profits combined. In a report explaining how it had managed to mess up so grandly, ubs noted that two-thirds of its losses were the fault of collateralized debt obligations—securities backed largely by subprime instruments—and that credit default swaps had been “key to the growth” of its out-of-control cdo business. (Gramm declined to comment for this article.)

Gramm’s record as a reckless deregulator has not affected his rating as a Republican economic expert. Sen. John McCain has relied on him for policy advice, especially, according to the campaign, on housing matters. The two have been buddies ever since they served together in the House in the 1980s; in 1996, McCain chaired Gramm’s flop of a presidential campaign. (Gramm spent $21 million and earned only 10 delegates during the gop primaries.) In 2005, McCain told a Wall Street Journal columnist that Gramm was his economic guru. Two years later, Gramm wrote a piece for the Journal extolling McCain as a modern-day Abraham Lincoln, and he’s hailed McCain’s love of tax cuts and free trade. Media accounts have identified Gramm as a contender for the top slot at the Treasury Department if McCain reaches the White House. “If McCain gets in,” frets Lynn Turner, a former chief sec accountant, “we’ll have more of the same deregulatory mess. I like John McCain, but given what I know about Phil Gramm, I wouldn’t vote for McCain.”

As a thriving bank exec and presidential adviser, Gramm has defied a prime economic principle: Bad products are driven out of the market. In John McCain, he has gained an important customer, so his stock has gone up in value. And there’s no telling when the Gramm bubble will burst.