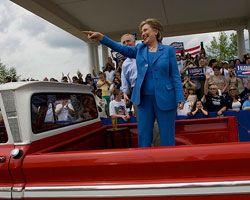 It took a long time for the results from Lake County, Indiana, to be filed on Tuesday night. Was it long enough for the conventional wisdom to be cemented?

As the hours passed into the night yesterday, Hillary Clinton’s chances dimmed. By mid-evening, she had lost North Carolina by 14 points and was clinging to a diminishing lead in Indiana. By 10 pm, the political world was all staring at the same situation: Clinton, up on Obama by an unexpectedly low 30,000-40,000 votes in Indiana, endangered by the still-absent results from the northwestern county known as Lake County, home of Gary and just outside of Chicago.

As the pundit class waited for Lake County to tabulate, Clinton’s precarious position became the only topic of conversation. On MSNBC, Tim Russert declared the race over, saying that Clinton had no realistic path to the nomination after the events of the day. Chuck Todd, normally beholden to the numbers and unaccustomed to bold proclamations, conceded that Russert may have been correct. On CNN, David Gergen said that Clinton’s ability, seen repeatedly in the campaign, to respond with a victory when her campaign was on the precipice had finally failed her. Democratic superdelegate and CNN contributor Donna Brazile stated that it was in the best interests of the Democratic Party to unify around one candidate. In fact, the entire broadcasting team at CNN, seemingly over a dozen people, was so dismissive of the New York Senator’s chances that Clinton surrogate Lanny Davis complained about the coverage on air.

But then, after midnight, Lake County finally submitted its result and Clinton won Indiana by two points, momentarily jeopardizing the media narrative already in the making. But it appeared that Obama’s miserable two weeks leading up to election day Tuesday set the bar for him so low that his 14-point victory in North Carolina and his two-point loss in Indiana were effectively a victory in the media’s eye, which, jaundiced by the expectations game, doesn’t see a win as a win and a loss as a loss. Adam Nagourney, the New York Times‘s lead political reporter, published a news analysis Wednesday morning that began, “In this case, a split was not a draw.” The Drudge Report ran a simple headline under a picture of Obama: “The Nominee.”

And maybe rightfully so. Clinton won Indiana by 23,000 votes. That means if 12,000 late-deciding Indianans had woken up on the other side of the bed, or seen one fewer Clinton ad, or had one more conversation with their Obama-loving granddaughter, the election would be, for all practical purposes, completely over. And besides, Obama’s lead in the delegate count grew because of a split decision in Indiana and a significant delegate pickup in North Carolina. Moreover, Clinton now has fewer pledged delegates with which to close the gap. She must now win a staggering percentage of the superdelegates to overturn Obama’s lead in the pledged delegate count.

That that leaves her with three options.

First, keep fighting like nothing has changed. When their candidate is challenged, Clinton supporters respond with huge monetary shows of support. And when their careers are challenged, the Clintons themselves kick it into another gear. Hillary Clinton can double down on the upcoming primaries in West Virginia and Kentucky (where she leads by large margins), ratchet up the calls to seat Michigan and Florida, make a zillion phone calls to superdelegates every day, and hope that Obama gets caught in another Reverend Wright-esque sandstorm. (It wouldn’t hurt to drop the gas tax pander.) Rumors persist about one last piece of truly nuclear opposition research the Clinton campaign has held back about Obama. It could release some such thing; the only danger is that if Clinton does not win the nomination, the Democratic nominee may be fatally wounded. But wounding the nominee is obviously not a concern if the Clinton campaign chooses this option, anyway.

Second, she can drop out immediately. Despite the calls for this that are certain to ring through Obama-friendly parts of the blogosphere today, this may not be the best option for Obama. If Clinton drops out this week, Obama may lose the upcoming primaries in West Virginia and Kentucky to someone who is not on the ballot.

Third, lay the groundwork for a graceful exit in a few weeks. Assuming that Clinton sees the end of the road on the horizon, this choice has several advantages over option number two. First, the Clintons have donated a lot of their own money to the campaign; staying in and continuing to raise funds allows them to retire some of that debt. Second, the last two weeks of the campaign can take a conciliatory tone, attempting to convince Democratic voters who have cast their lot with Clinton that Obama ain’t so bad after all. This would go a long way in rehabilitating Bill and Hillary Clinton’s reputations within the Democratic Party, and position Hillary for a vice presidential selection, should she be interested. If she hopes to be a future Senate Majority Leader or a candidate in 2012, this route may be the necessary one.

At this point, the race is all about Hillary Clinton’s psychology. She and she alone has to choose one of these three options. Bill Clinton will likely be part of the conversation, and Chelsea may be too. But ultimately, the person who has put in the most work perhaps of anyone in America over the last year has to either accept that she has lost the fight of her life, or decide that she is willing to continue down what becomes an increasingly untenable road. The media’s collective mind seems to be made up, meaning that if Clinton continues on, she will have to do so under a chorus of calls for her to euthanize her campaign.