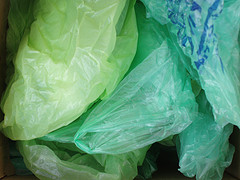 I bought groceries at Trader Joe’s the other day. As anyone who has ever shopped there knows, Trader Joe’s is full of incredibly attractive, cheap food, which, if you manage to make it through all the plastic packaging it comes in, you can actually eat. Unfortunately, by the time I started cooking I had more or less lost my appetite, since every time I discarded one of those packages I felt like I dropped another circle in hell.

So I pretty much love Daniel Burd right now. The 16-year-old from Waterloo, Ontario, as part of a science fair project, figured out a way to break down the polymers in plastic bags—compounds that can last for over 1,000 years—in about three months. Essentially, Burd hypothesized that since the bags eventually do degrade, it must be possible to isolate and augment the degrading agents.

Turns out that it’s not only possible, it’s kind of easy. Burd combined ground polyethylene plastic bags, sodium chloride, dirt from a landfill (which theoretically contains the microorganisms that ultimately degrade the plastic) and a yeast mixture in shakers for four weeks at a consistent temperature of about 86 degrees. At the end of the month, he took a sample of that mixture and combined it with a new one, with the goal of increasing the overall concentration of microbes. After one more repetition, he put fresh plastic bags in his solution for six weeks. In the end, the plastic degraded nearly 20%. A little more filtering to figure out exactly which microbes were the most effective, and he upped the degradation rate to 32%. He concludes, “The process of polyethylene degradation developed in this project can be used on an industrial scale for biodegradation of plastic bags. As a result, this would save the lives of millions of wildlife species and save space in landfills.”

So, will this really work? Has a teenager really found a way to rid us of one of our most persistent environmental problems? Who knows, but judges at the Canada-Wide Science Fair apparently agree that it’s worth pursuing. They sent Burd home with $30,000 in awards and scholarships. You can read his final report (all six pages of it) here (.pdf).

Photo used under a Creative Commons license from Arbel Egger.