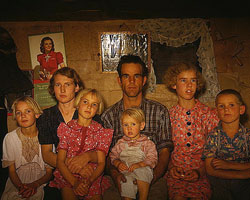 When it passed in 1993, the Family Medical Leave Act (FMLA) was supposed to be the beginning of a new movement to reshape the workplace to reflect the needs of working families. But the bill—allowing some workers to take a few weeks off, unpaid, to care for a new baby or a sick family member without losing their jobs—is incomplete. It does nothing for people who simply can’t afford to take unpaid leave, while leaving out 40 percent of the workforce, including millions of workers employed by companies with fewer than 50 employees in a 75-mile radius, those who work part time, or, strangely, flight attendants. The US is the only industrialized country in the world that doesn’t provide paid maternity leave, putting it on par with such nations as Liberia and Swaziland, according to one study. But for 15 years the FMLA has been the beginning and the end of federal work/family policymaking.

Groups like the US Chamber of Commerce have relentlessly attacked the popular law as an expensive administrative burden rife with abuse, and Republicans have responded by obstructing even the most minor attempts at expanding its reach. They’ve found an ally in President Bush, whose father twice vetoed the original FMLA, and who is quietly trying to gut the law through the regulatory process before he leaves office. Earlier this year, the Department of Labor proposed new regulations that would, among other things, make it easier for employers to deny leave requests and allow employers to directly quiz an employee’s doctor about his or her medical condition. (Currently, employers need an employee’s permission to contact physicians, and then they must have a medical professional, rather than the boss, contact the doctor.)

Frustration with federal inaction has led many states to move forward to create their own family-friendly workplace laws. In May, New Jersey became the third state in the nation to provide paid parental leave, along with California and Washington. Earlier this year, Washington, DC, passed legislation requiring employers to give some workers at least seven days a year of paid sick leave. Other states are considering following suit as political support grows for helping people juggle work and family. Meanwhile, the federal government is still stuck in 1993.

All that, however, may change this year, as Democrats have pushed the issue to the forefront of the political agenda, both in Congress and in the presidential election, where Democrats may make work/family policies an important wedge issue in the fall.

The new Democratic Congress has proposed a flurry of legislation designed to bring federal workplace policy into the 21st century. In January, for the first time in 15 years, Congress amended the FMLA to allow family members caring for wounded service members to take 26 weeks of job-protected unpaid leave and expanded the law’s definition of “caregiver” to include siblings and other next of kin, not just parents. Last week, the House voted to allow federal workers to take 4 of their 12 weeks of FMLA leave with pay after the birth or adoption of a child. Virginia senators Jim Webb and John Warner have introduced companion legislation in the Senate. (Bush has already threatened to veto the bill, calling it a “costly, unnecessary, new paid-leave entitlement.”)

Other bills introduced over the past year would extend the FMLA to many more workers, make some of the leave paid, require paid sick days for full-time workers, and increase workplace flexibility. And a bill that would finally allow the FMLA to cover flight attendants, who don’t qualify because of a quirk in the way their hours are calculated, passed the House in May by a vote of 402 to 9, a sign that many of these bills have bipartisan support.

Democratic presidential nominee Barack Obama signaled his intention to make this a campaign issue on Friday, when his wife Michelle made a visit to a lunch sponsored by the National Partnership for Women and Families, one of the biggest players in the FMLA debate. Before an audience of 1,000 of the group’s donors and guests, Obama told stories about her own personal struggles as a working mother, and reiterated her husband’s support for measures that would help take some of the stress off American families. “It’s a cause I have championed and will continue to champion,” she said.
Work/family issues were a staple of Hillary Clinton’s stump speeches, and something she has long advocated in the Senate. But Obama is also on record supporting virtually the entire package of Democratic bills designed to support families in the workplace and is not entirely a Johnny-come-lately to the issue. In 2004, when he was elected to the Senate, he hired Karen Kornbluh, the former director of the Work and Family Program at the New America Foundation, as his policy director, giving her, and her pet cause, a prominent place in his political operation. Kornbluh’s fingerprints are everywhere on his positions in this area. Obama has called for expanding the FMLA to cover smaller companies and has pledged to create a federal fund to help states create paid-leave programs. He has also supported measures that would give parents time off to attend their children’s school functions and meetings without fear of losing their jobs.

Polls consistently show that most Americans strongly support policies like expanding the FMLA, giving Obama an opportunity to distinguish himself from his opponent on something Americans of all stripes care about. John McCain has remained mum when it comes to the expansion of family leave, though he voted to pass the original law back in 1993. Given what’s happening in the states, it’s clear that Americans are hungering for change on this front. As Debra Ness, president of the National Partnership for Women and Families said on Friday, ticking off a list of the group’s accomplishments this year, “If we can accomplish all this in a recession, in an election year, in the seventh year of an administration that has turned such a blind eye to women and families, just think of what we’ll be able to accomplish next year.”