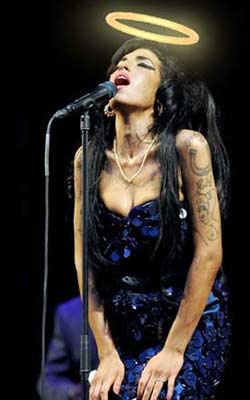 I’m not a huge fan of her music, but I liked Rehab and her whole downtown, big hair, hard partying girl schtick. She’s the antithesis of the fake-squeaky clean, “I’ll pretend to be a virgin,” blonde plastic Barbie Hollywood crams down our throats everyday.

But that was when I thought she knew what her limits, however stratospheric, were. Clearly, she does not. Way she’s going, she’s gonna wake up dead one day, as a grizzled old west Texas cowboy I used to know put it.

Girlfriend, fresh from a collapse and a grim diagnosis, just spoiled her reemergence by cold cocking a fan during a concert. Now, it’s every woman’s right—nay, her duty—to slap the crap out of any man who gropes her, but given the increasing likelihood that record companies may rethink their investment in what may be a very short career, Winehouse might oughta have let those enormous bouncers flanking her flatten the twerp. Amy, Amy, Amy—what are you doing?

But here’s what I also dread: That bad-ass Amy Winehouse will get straight…and then go straight.

There’s no doubt in my mind that if Britney Spears ever pulls it together—and I sincerely hope she does—she’ll go all chirpy Christian and ‘ain’t life grand?’ on us. She’ll start a foundation to ’empower’ young girls. She’ll lead anti-smoking campaigns and re-virgination ceremonies. She’ll get all “up with people,” and give us all diabetes with her newfound sweetness.

Ah, the future talk of enjoying sunsets and how she gets high on little Skeevy and Bucket, or whatever her poor, benighted kids are named. What else can we expect from the only adequately talented, or interesting, Spears? Here’s hoping she lives a long time to bore the hell out of us with her Christian Pop comeback and near-Mormon sons.

But Amy—I’m hoping for a snarling recovery in which she terrorizes the staff at Betty Ford and refuses to let anyone around her drink or do drugs. Not because she’s so holy, post-recovery, but because she’s such a bitch.

“If I can’t get high, no one can, mate!” or whatever it is that a downtown Brit would say in such a situation. I want to hear her sing songs about how much fun crack was and how she wished she could still do it. I want to hear her dish on the other celebs puking in their $20,000 a week suites at the clinic, how many of them she shagged, how many of them she karate chopped. I want to see paparazzi photos of her bitch slapping that godawful husband of hers into sobriety along with her.

Even better, shots of her stone, cold sober throwing him and all his clothes from the window of their flat.

I hope Winehouse the junkie “dies” so that Winehouse the magnificent bitch survives to terrorize the weak for a long, long time. Get well, Amy, but don’t get nice.