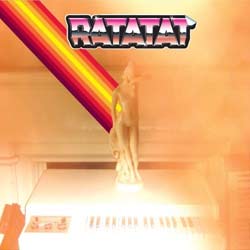 Maybe you’ve been watching TV lately and you’ve seen the Rhapsody commercial where there are a bunch of balloons floating around that magically make logos and stuff, and there’s an intriguing instrumental track underneath it, funky like ’70s soul, but quirky like ’00s electro, and there’s also a tiger roar in it, nonsensically? Well, that’s “Wildcat” by New York duo Ratatat, and it’s a pretty great little tune from their 2006 album Classics. (See completely ridiculous fan-made video below). That track hinted at a new path for American electronic music, experimental but organic, an intriguing answer to European austerity. On their just released new album, the unfortunately-titled LP3, they seem to be on hold, turning again to the same disco-rock beats for an album that’s sometimes intriguing but often fades into the background.

Not that there’s anything wrong with background music. Who doesn’t like some cool downtempo for their dinner parties: Groove Armada, Zero 7, Morcheeba. But what elevates the best instrumental “chill” music above the fray is a certain level of intellectual density, perhaps even some confusing tricks. Boards of Canada, for instance, may seem nursery-rhyme simple on first listen, but close attention reveals intricately layered percussion, melodic patterns that repeat at strange intervals (like every five measures instead of four) and rich structure that keeps even 7-minute tracks dramatic. On LP3, Ratatat seem mostly to be reprising “Wildcat”: track 2, “Falcon Jab,” even has moments that sound like they’re just playing “Wildcat” backwards.

To their credit, the album soon veers in other directions: “Mirando” has the syncopated rhythm of dancehall and a buzzing lead guitar melody that could be lifted from Wolfmother, “Flynn”‘s soulful swing could fit right in on a Gnarls Barkley record, and “Imperials” has the underwater dubbiness of Massive Attack. But if I was their producer, I would have pulled out tracks like “Shempi,” that just sound like “Wildcat” with a bigger dance beat, and asked the duo to try something completely different. So go ahead and play this at your dinner party, but be prepared when people ask you if this is a remix album of that song from the balloon commercial.