1978: Supreme Court’s Marquette decision gives banks the right to make loans in states other than where they are headquartered; lenders rush to places with the weakest consumer protections, e.g. Delaware and South Dakota. 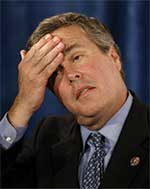 April 2, 1987: Sen. John McCain meets with federal regulators to discuss investigation of Lincoln Savings and Loan. The thrift’s owner, Charles Keating, was the senator’s business partner and campaign contributor, and flew McCain around on his private jet.

Dec 9, 1988: Silverado S&L collapses, leaving $1.3 billion taxpayer liability; board members include Neil Bush, who engineered loans to friends in what federal Office of Thrift Supervision will call “multiple conflicts of interest.” Bush later tells Congress a few of his deals may have looked “a little fishy.”

Feb 6, 1989: President George H.W. Bush bails out S&L industry; among those helped is his son, Jeb, as government takes over most of a $5 million second mortgage on his Miami office building.

Dec 22: As part of Newt Gingrich’s Contract With America, Congress enacts a measure making it more difficult to sue companies for securities fraud. 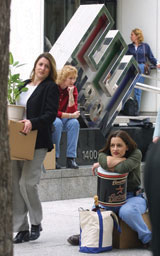 Dec 27: American Homeownership and Economic Opportunity Act makes it harder for consumers to get out of lender-required insurance. National Association of Realtors lobbies hard for it, spending $9 million, plus $4 million in contributions.

Oct 7: Swiss investment bank UBS announces that Sen. Gramm is joining it to “advise clients on corporate finance issues and strategy”; he will also lobby Congress, Treasury, and Fed on banking and mortgage issues as industry pushes to eliminate predatory-lending rules.

Dec 18: Conseco files for bankruptcy, mostly due to its purchase of subprime lender Green Tree. In all, 13 banks have failed during 2002—most, according to a Fed report, because of bad loans and “improper accounting related to the securitizing of assets.”

Jan 7, 2004: Federal Office of the Comptroller of the Currency issues final rule to preempt states from applying most of their credit laws to national banks and their subsidiaries.

Sept 1: As housing bubble begins to deflate, administration economist Patrick Lawler announces, “There is no evidence here of prices topping out. On the contrary, house price inflation continues to accelerate.”

Sept 22: Illinois Supreme Court hands mortgage lenders a victory, blowing away a 3% cap on fees for loans with more than 8% interest. 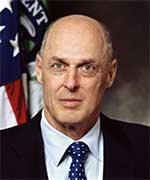 Jan 29: Paulson tells Congress, “One of the pleasant surprises I had coming to government has been the strong economy we have today.”

Feb 28: Bernanke tells House Budget Committee the housing sector “is a concern, but at this point we don’t see it as being a broad financial concern or a major factor in assessing the course of the economy.”

April 2: Subprime giant New Century Financial files for Chapter 11 after being forced to repurchase billions of dollars of bad loans.

June 9: In Wall Street Journal interview, former Fed governor Edward Gramlich accuses Greenspan of blocking a 2000 proposal to increase scrutiny of subprime lenders. Greenspan responds there are “a very large number of small institutions, some on the margin of scrupulousness and very hard to detect when they are doing something wrong.” 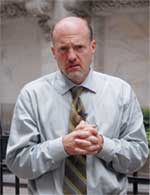 July 16: Jim Cramer, host of CNBC’s Mad Money, says the subprime “lending thing” is “completely meaningless…It has no relevance whatsoever.” Less than 3 weeks later, Cramer will have meltdown on air, pleading with Fed to cut rates and save Wall Street.

July 19-20: In congressional testimony, Bernanke cuts growth forecasts for 2007 and 2008, blaming problems in housing market; warns that subprime crisis could cost up to $100 billion.

Aug 6: American Home Mortgage, one of the largest US independent home-loan providers, files for Chapter 11.

Aug 31: Ameriquest goes out of business.

Sept 14: Sen. Barney Frank in Boston Globe: Mortgage crisis “was in large part a natural experiment on the role of regulation.” Sept 20: Treasury secretary Paulson tells House Financial Services Committee that “fundamental reappraisals in the pricing and appetite of risk have taken place numerous times…We are in the process of another such reappraisal.”

Feb 6: Longest period of decline in nationwide house prices since 1990.

March 7: Former bosses of Merrill Lynch, Countrywide, and Citigroup questioned by a congressional panel about the $460 million in compensation they received between them during 5 years of subprime boom.

March 16: Bear Stearns announces takeover by JPMorgan Chase in Fed-engineered bailout; measure approved by Fed Board of Governors with fewer votes than required by law, under a post-9/11 “national security emergency” exception.

April 18: Jerry Bowyer, chief economist for financial services firm Benchmark, says in New York Sun op-ed that fault for subprime crisis “lies with the small army of hard-left political hustlers who spent the early 1990s pushing risky mortgages on home lenders. And the fault lies especially with the legislators that gave them the power to do it.”

May 6: Bush announces he will veto legislation directing $15 billion to neighborhoods ransacked by foreclosures. Also threatens to veto legislation to provide $300 billion for struggling homeowners (and force lenders to renegotiate some mortgages) because it would be a “burdensome bailout” that “opens taxpayers to too much risk.”