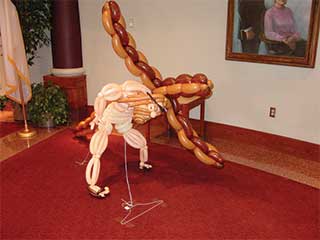 As the annual convention of the Fellowship of Christian Magicians kicks off on a hot July afternoon, the campus of Indiana Wesleyan University is awash in displays of irreverent reverence. Ventriloquists converse with Scripture-quoting puppets, unicyclists pedal through the halls, and a man plays “Amazing Grace” on a turkey baster. In the gym, vendors sell mysteriously materializing Communion cups, paper that dissolves in water (perfect for making sins “disappear”), and fire-spouting Bibles ($50 each, they open “with or without flames”). Visitors to the auditorium are greeted by a Noah’s ark and Jesus, life-size and complete with cross and crown of thorns, made from balloons by a group of self-described “balloonatics.” Outside, preteens wearing gold crosses and short shorts practice high kicks: The five-day event coincides with a gathering of the Fellowship of Christian Cheerleaders.

One of the main attractions is Duane Laflin, a 54-year-old former fellowship president who’s known for taking his showmanship as seriously as his message. Notebook- and camcorder-wielding fans pack into a small auditorium to see him deliver a lecture titled “Gospel Magic With a ‘WOW’ Factor.”

Laflin opens with a series of standard scarf tricks that ends with a twist—a silk square emblazoned with Jesus’ face. “One of my theories is that you have 15 seconds to connect,” Laflin tells the crowd. “You need to do something wonderful in the first 15 seconds, or you’re going to have a hard time holding on.”

To demonstrate one of his favorite bits of legerdemain, Laflin selects a boy named Drake and asks him to mark a quarter. “This quarter represents Drake’s life,” announces Laflin, delivering a stream of well-rehearsed patter. “Now, it’s a treasure, isn’t it?” He places the coin in a small box, and retrieves a silver cube, which, he says, represents God’s will for Drake’s life. “Would you like to know what’s in the cube?” Laflin asks. Drake nods. Music swells from a set of portable speakers. “There’s only one way for you to know—you must give up your life. You can keep the quarter or pick God’s plan for your life. What’s your choice, Drake?”

After a moment’s hesitation, Drake picks God’s plan. Laflin hands him the silver cube. Nervously, the boy lifts its lid—only to find that it contains six smaller boxes, nested like Russian dolls. Inside the final box is a handkerchief with two quarters inside. One is unmarked; the other is his original coin. “When you make the decision to live for God and give your life to him, God gives your life back to you so you can live for God,” Laflin says as Drake stares at the coins in amazement. After Laflin finishes his lecture, audience members—mostly middle-aged men and teenage boys—line up for autographs.

The fcm, which boasts about 2,000 members around the world, is a nondenominational organization dedicated to “the winning of souls to Christ” using “sleight of hand, optical illusion, ventriloquism, puppets, balloons, clowning, juggling, storytelling, and other visual arts.” The transformation of beguilement into belief can take many forms. A mind-reading trick may illustrate God’s omniscience; an escape-artist routine reminds audiences that they can break free of sin; an illusion in which three black rings explode into color is a metaphor for what it’s like to suddenly see the light. Pulling biblical lessons out of a hat may seem forced, but as the website of the ministry Seeing Is Not Believing puts it, “Many people will come to see a woman get cut in half that would never set foot in a church building otherwise.”

The 600 attendees of the convention are mostly amateurs, but there are plenty of pros, like ventriloquist and “motorcycle missionary” Jill Bryan. Asked why she chose to spread the good word with a dummy dinosaur named Beano and a stuffed chimpanzee that wears a biker jacket, she explains, “Jesus told everything through a parable. He told everything through a story. I thought, ‘Wow, what better way than to use the variety arts?'”

“Why should the devil have all the good entertainment?” asks Kerry Kistler, a chalk artist known for speed drawing canvases that reveal the face of Christ when exposed to black light. “We’ve surrendered the arts to the secular world for far too long.” (Christian balloon artists, for example, are engaged in a running feud with “adult” twisters whose creations are more prurient than pious.)

But the relationship between the magical arts and evangelical Christianity is not without controversy. After all, Deuteronomy explicitly forbids witchcraft, divination, and sorcery, and Revelation warns that “those who practice magic arts” will wind up in “the fiery lake of burning sulfur” along with deviants, unbelievers, and murderers.

Contemporary critics have lumped magic shows in with Dungeons & Dragons and Ouija boards as another example of Satan’s deceptions. J.K. Rowling’s wizards inspired a stream of anti-occult critiques, including the book Harry Potter and the Bible: The Menace Behind the Magick. And when two secular Scottish magicians created a TV show in 2005 called The Magic of Jesus, in which they replicated biblical miracles, a Pentecostal bishop suggested that they attempt a new trick: crucifying themselves.

Laflin agrees that the Bible forbids magic, but says it’s a “terminology thing.” “The magic that it’s speaking of is trying to speak to the dead or cast spells on people,” he explains. “What I do is sleight of hand. It’s literally optical illusion. It’s not what the Bible forbids at all.” Gospel magicians regularly assure their audiences that they don’t possess real mystical powers. (“I do tricks, just tricks,” Laflin tells his audience. “But the power of God is real and wonderful.”) Some have eliminated the word “magic” altogether, referring to themselves instead as “gospel illusionists.”

Gospel magic dates back to at least the early 1900s, when the Reverend C.H. Woolston, pastor of the East Baptist Church in Philadelphia, began using candles and bells as props in his lessons. He became a sensation, especially with children, who another preacher claimed would “gather around him…like bees around flowers.” Woolston wrote the first gospel magic book, Seeing Truth, and assembled the first convention of “gospel illustrators” in 1917.

With time, missionary magic was taken up by a group of preachers who called themselves “magi-ministers.” In 1940, J.B. Maxwell explained in his book Magical Object Lessons that “Objects of any kind are valuable to use in teaching lessons, but when the objects are used in such a way that a mystery results, the interest is not only more fully aroused, but also the lesson connected with the mystery is more indelibly stamped upon the mind.”

Laflin came to a similar realization when he was 20 and worked some magic into a church lecture for kids. It was a hit, and before he knew it, he was imparting magical object lessons every Sunday morning. “I was a frustrated artist,” he says. “All of a sudden I could create stories, visual events that made people go, ‘Ooh, aah, isn’t that neat?’ It was a very happy thing for me.” Laflin now runs a theater in Libby, Montana, with his wife, Mary, a platinum blonde who acts as his stage assistant. (The two also perform an Elvis-inspired act, which explains Laflin’s jet-black dyed hair and sideburns.) Though his stage persona is all schmaltz and sequins, Laflin is humble and unguarded in person. “I’m doing what I love,” he says. “I’m doing what I was made to do.”

Gospel magicians are confident that they’re following a higher calling, but they worry about how to respect—and illuminate—the line between illusion and bona fide miracles. Nobody wants to be accused of stealing the spotlight from Jesus. Not that He wasn’t something of a showman: Turning water into wine, walking on water, producing loaves and fishes to feed the multitude—the Son of Man certainly knew how to bring the wow factor. In his book, What a Fellowship, one of the fcm‘s founders observes that “the surprise ending in magic is indeed very much like the effect that Jesus’s parables had on His audience.” The fellowship’s Christian Conjurer magazine recently ran a cover article titled “Jesus—Magician or God?”

That’s a trick question, of course. For some gospel magicians, the very fact that their powers aren’t supernatural is proof that the biblical miracles were real. “I carry tons of equipment in order to do my shows,” says André Kole, a famed magician who consults for David Copperfield and has mastered an illusion where he appears to walk on water. “If Jesus was a magician, you’d have to visualize 2,000 years ago Jesus and the disciples walking through the dusty streets of Galilee wearing sandals, with three diesel trucks behind them carrying all their equipment.”

But magic and miracles do share something in common: Both tap into our desire to believe in something greater and more mysterious than ourselves. “A lot of folks want the supernatural—they want something special,” Laflin says, explaining why adults, not kids, respond best to his act. “They want to believe in something, but they don’t know which way to go. You put the right thing in front of them and give them half a reason to go for it, and they will.”

just before midnight on the third day of the convention, a group of about 45 magicians gathers in a dorm lounge for “the late, late show”—a tradition where they share insider tips and tricks until the last one heads off to bed. Laflin is again the center of attention, demonstrating illusions as a thunderstorm erupts outside. He does a banana trick, earning groans when he describes its “appeal.” He fields a stream of questions: How do you pull off a thumb palm? Should a Christian performer wear makeup? A man on a couch raises his hand. “Can you talk a little about posing, staging, pausing for applause—things like that?” he asks.

It’s a question that cuts to the heart of the gospel magicians’ conundrum. While they seek to thrill and entertain, they must never derive too much pleasure from performing, lest they divert glory from God. Given that most successful magicians (not to mention preachers) are born scene-stealers, this can be tough.

Laflin considers the question for a moment. “Audiences like to clap,” he says. “And if you do something that others enjoyed, you ought to let them thank you. It’s just a matter of keeping your heart right.”

At 1:15 a.m., the storm knocks out the lights. Though it is too dark to see and Laflin is clearly fatigued, nobody moves to leave. Instead, the magicians pull out pdas and cell phones and point them at Laflin as he continues to patiently answer their questions, bathed in an ethereal glow.