First of all, not to rub it in to my streetcar-entrapped Mother Jones colleagues, but a motorcycle makes things a lot easier.

To those of you who aren’t located within about a 10-mile radius of San Francisco, let me remind you of our unique meteorological situation. The California Current brings cold Pacific Ocean water south from Canada, while upwelling from the frigid, murky deep peaks during the summer months, making our ocean waters colder in June and July than they are in December. The summer sun heats the land in central California, causing high low surface pressure, and sucking the chilly, saturated air in from the sea and over SF. This creates the famous fog, which everyone thinks is so charming in pictures but actually feels like a soggy blizzard. It’s my personal theory that the Bay Area’s notorious political uniqueness is actually a symptom of meteorological alienation from the rest of America, frolicking in the summer sun while we huddle around our space heaters. Whatever else our shivery summer isolation causes, it makes an outdoor music festival in Golden Gate Park, out by the ocean where thick fog is almost inevitable, seem about as attractive as spending an evening under the vegetable sprayers in the supermarket. 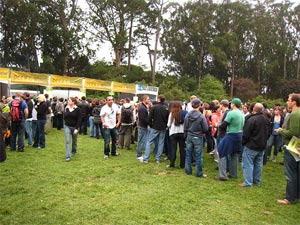 Unfortunately, that’s where production company Another Planet decided to stick Beck and Radiohead yesterday, and what are you going to do, not go? We bundled up and got ourselves out to the park, and trouble started immediately. Organizers seemed to be planning for a couple hundred people, not the 60,000 who eventually showed up, and claustrophobia-inducing bottlenecks were commonplace, even early in the afternoon. Lines for the few food and drink stands stretched as far as the eye could see (and I have no idea where my MoJo comrades found shrimp ceviche!), and Beck was set to play on a side stage, accessible only through a tiny, winding pathway through the trees. Because, you know, who likes that Beck guy, nobody. After standing in a stationary people-jam in this torture funnel for ten minutes, concert-goers started to rebel, and we witnessed the first of five examples of fence-trampling we would see over the course of the night. 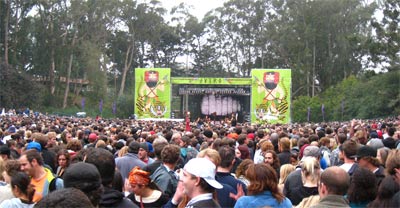 Beck himself took the stage with a mellow nonchalance, remarking that he was glad somebody told him to wear a scarf. I gave Modern Guilt a tepid review last month, but interestingly, these new songs seemed to emerge from under the CD’s muddy production and take on new life: “Gamma Ray”‘s surf-y groove and the funky breakbeat of “Youthless” had the crowd dancing, although it was hits like “Loser” that got the “woos.” Unfortunately it sounded like some of the airborne moisture got into his drum machine, as an 808-driven rendition of the 8-bit remix of “Hell Yes” came out horribly distorted. But when Beck stops being silly, he has a phenomenal voice, hitting the high notes with clear, bright tones, making ballads like “Lost Cause” or his soaring cover of the Korgis’ “Everybody’s Got to Learn Sometime” all the more enjoyable live. But while fence-crashers had by now created a new, wider pathway to the main stage area, we thought it prudent to get a move on to catch Radiohead’s 8 p.m. start time.

We got settled in right next to glow-in-the-dark hula-hoop-wielding hippies just as the stage lit up to the sounds of “15 Step” from last year’s universally-hailed In Rainbows. While we were miles from the stage, a set of video screens offered quirky closeups of the band members, filtered to match the colors of the stage lighting. Most impressive was a set of 72 vertical light strips which hung from the roof all the way down to the stage (with some stopping just above the band). They were both a minimalist art statement and a technological wonder, displaying random patterns and even barely-obscured text, and yet they evoked stately architecture like a cathedral or Superman’s Fortress of Solitude. Somebody clearly took some cues from Daft Punk.

Unfortunately, something happened I’ve never experienced at a concert before: the PA cut completely out not once, but twice, plunging the audience into stunned silence as the band continued playing. I had a vision of the gay dude in Airplane grinning maniacally over an unplugged electrical cord, but who knows what the problem was. 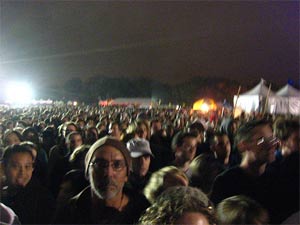 It sounds like a recipe for misery: bitter, soggy cold, overcrowding, and hippies. But the band themselves were phenomenal. When it wasn’t cutting out, the sound had a clarity I’ve rarely heard at large outdoor festivals. Every individual instrument seemed perfectly defined, even shakers or subtle effects. It served to illustrate the hard work this band must have done over the past year, developing a live show suitable for giant outdoor stages, despite the complexity of their new material. New songs like “All I Need” were hypnotic and delicate, and the thick reverb on Thom Yorke’s falsetto in “Reckoner” gave the song a jaw-dropping impact. Classics like “Paranoid Android” became operatic in scope, perfectly executed and exquisitely balanced. The only technical issue surfaced during what must be an extraordinarily challenging version of “Idiotheque,” during which the band forces drummer Phil Selway to join in with a blipping, syncopated drum machine, accompanied only by Yorke’s voice. When it works, it’s awe-inspiring, but when he’s not quite in synch, it’s immediately obvious.

I hate to use a cliché Olympic metaphor, but this is a band willing to attempt unheard-of levels of difficulty, and they usually pay off: songs feature complex time signatures, like “Android”‘s 7/8 sections and “15 Step”‘s 5/4 shuffle, and even standard 4/4 tracks like Amnesiac‘s “Pyramid Song” obscure the beat under strange rhythmic twists. Amusingly, they flubbed their simplest number, an acoustic “You and Whose Army,” when the wrong guitar chord caused Yorke to collapse into embarrassed laughter. It was an endearing moment in a show so well-executed it was almost unreal.

Taking their cue from remixers, the band added a thumping beat to “Everything in Its Right Place” to close the show, and the light strips flashed the words in bright pink lines, moving across the stage like an optical illusion. “What was that you tried to say,” sang Yorke, and multi-instrumentalist Jonny Greenwood digitally snatched a brief clip of his voice, winding it backwards and looping it, as the song climaxed in an extended instrumental outro. It was both sonically exciting and metaphorically intriguing, an instant recording of a live performance turned into an instrument in that performance: a band feeding off itself. The loops continued even as the band left the stage, mutating into a dreamlike wash of sound.

While some may criticize Radiohead as dour, whiny, and weird, they may be our only great band willing to look 2008 in the face: a reality of technological wonders and potential apocalypse, of environmental disaster and artistic beauty, of political terror and individual compassion. How strange, how wonderful, that 60,000 people will brave the arctic fog and panic-inducing crowds to listen.