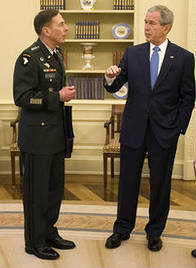 General David Petraeus is a popular man in Washington and not without good reason. Under his watch, Iraq has gone from total chaos and anarchy to partial chaos and anarchy. No small achievement when you remember back to how things were just a year and a half ago. So it may come as no surprise that politicians seeking election—particularly those, like John McCain, who point to recent security gains as evidence we we are “winning” in Iraq—love to bask in the Petraeus glow. McCain has pointed time and again to the “surge” as proof that things are going well, and on at least one occasion declared the US has already succeeded in Iraq. But Petraeus, bound next month for his new post as CENTCOM commander, warned in a recent interview with Newsweek against rushing out to buy some ticker tape. From Newsweek:

Petraeus acknowledged that this policy of modesty in the face of success is very much informed by our premature victory ejaculations of previous years (before he took charge, of course). “The champagne bottle remains in the back of the refrigerator,” he says. “When you’ve been in Iraq for as long as actually both of us have, coming up on four years, you’re a little less prone to get too excited too quickly.”

…”Yes, Al Qaeda in Iraq has been significantly diminished, its capability substantially degraded,” he says. “But we assess they remain lethal—what we call the ‘wolf closest to the sled’.” And, he adds, “every time you start to feel really good, there will be some kind of incident. There will be a suicide-vest attack; there will be a car bomb attack or what have you.”

And what about the idea that the surge itself is primarily responsible for recent successes? Could progress have come without the increase in troop levels? Yes, Petraeus said, contradicting McCain’s mantra that it was US strategy as opposed to developments outside of American control (like Sadr’s ceasefire and the decision of Sunni tribes to switch sides, if only temporarily) that is responsible for the diminishing violence. More from Newsweek:

Petraeus is careful not to credit all the progress to the surge of U.S. troops in 2007. The sea change came last year from a series of movements now known as the Awakening, when Sunnis, organizing around traditional tribal leaders, decided to turn on Al Qaeda as “an organization that embraces an extremist ideology, employs indiscriminate violence, and practices oppressive social customs,” in the general’s words. One of those customs was a ban on smoking. “That was the turning point when they cut the fingers off the first person who was smoking,” he jokes. “Can you imagine an Anbar sheik being told he can’t smoke?” So would the Sunni Awakening have succeeded without the surge? Possibly, he concedes, but the surge came at that time and helped empower Sunni leaders, paying their fighters and backing them up on the streets.

Photo used under a Creative Commons license from soldiersmediacenter.