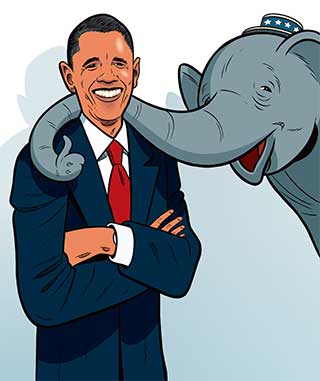 
“My grandmother’s house is right there behind us,” Anne DeCourcy says, pointing past a tall, flower-lined fence to one of the many single-family homes that now crowd the streets of suburban Leesburg, Virginia, about 45 minutes northwest of Washington, DC. “I grew up playing in what was a field right here, but it’s not the same; it’s very different, and it happened so fast that the people in the rest of Virginia are kind of shell-shocked.” Shell-shocked by northern Virginia’s explosive growth, yes, but also by the cultural and political transformation that has accompanied it—a transformation that, come November’s presidential election, could make itself felt at the national level.

DeCourcy, middle-aged with long blond hair and blue eyes and described to me before we met as a “rabid Republican,” has never voted for a Democrat in a presidential election, but this morning she drove in from her home in nearby Lovettsville (pop. 1,160) to tell me why she is supporting Barack Obama. We sit at her friend Joan Tellechea’s kitchen table. While Tellechea, a self-described independent, plies me with coffee and fresh banana bread, DeCourcy explains her decision to defect. “I’ll vote for anybody who can get more than half the vote,” she says. “It’s upsetting to me that the country is 50/50. I’m sick of it! And I think a lot of people that lean more conservative feel the same way.”

The Obama campaign is counting on it. Virginia, with its 13 electoral votes, is thought to be in play for the first time since 1964, as are other traditionally red states like North Carolina, Missouri, Montana, and Colorado. On the face of it, peeling Republican voters away from John McCain may seem like a stretch for a senator who last year was dubbed “most liberal” by National Journal. (Chris Saxman, McCain’s state campaign cochair, has characterized Obama’s positions as, “‘I don’t like guns. I’m going to raise your taxes. I don’t like coal.’ That’s a tough sell in Virginia.”) But Obama has made a point of reaching across the partisan divide, targeting the state’s moderate Republicans, primarily fiscal conservatives, concentrated in northern counties adjacent to the nation’s capital. The almost 2-1 margin by which Obama defeated Hillary Clinton in last February’s Virginia Democratic primary was attributed to record turnout among African Americans, but was also augmented by Republicans who took advantage of the state’s open system, allowing voters to cast ballots in both primaries; of the 7 percent of Republicans who voted in Virginia’s Democratic contest, an estimated 70 percent backed Obama. (McCain prevailed in the state’s Republican primary.)

It was no accident, then, that Obama’s first campaign stop after clinching the nomination was an amphitheater in northern Virginia—even if in many cases the so-called Obamacans had cast their votes not so much for Obama as against Clinton. That was what DeCourcy originally planned to do. “I was going to do it simply as a spoiler with no idea in the world of voting for him later on,” she says. But then, after Obama won in Iowa, she heard his victory speech. “He said, ‘We’re not red states or blue states; we are the United States,’ and I thought, ‘Finally, somebody said it!’ It literally made me cry. Then again, I’m menopausal.” The story reminds Tellechea of her own Obama conversion, which she also experienced while listening to one of his speeches. “I was washing the dishes,” she tells me. “The TV was turned this way. I wasn’t watching it; I was just listening. All of a sudden, I just got chills all over me, and I started laughing because it was so unexpected. I don’t even remember what it was he said.”

What exactly the Illinois senator says seems of less importance to many Obamacans than how he says it. According to Steve Robin, a land-use attorney in Leesburg who describes himself as an independent, his conservative friends have been surprisingly open to Obama’s candidacy, in large part due to the senator’s “distinctive personality” and “the strength of his charisma.” “Dyed-in-the-wool Republicans are saying Obama is not that awfully bad,” he says.

For Evan Pivonka, the issue is character. A doctoral candidate in political theory who, before enrolling at the University of Virginia, worked for the influential conservative writer Victor Davis Hanson, Pivonka attributes his support for Obama to a “gut feeling.” Last fall, his then-girlfriend dragged him to an Obama fundraiser, from which he left “completely blown away.” Pivonka explains, “He appeals to me at some level that, even though I can’t account for it in terms of issues, I’m going to listen to my gut and support a candidate that is just appealing to me for whatever reason. Whether that’s shallow or because he’s marketed well, I’m not sure.”

Back at Tellechea’s kitchen table, DeCourcy lists all the ways she disagrees with Obama, often passionately, on issues like immigration, health care, welfare, and taxes. She also worries about whom he might appoint to the Supreme Court. Still, she prefers him to McCain, who she doubts will be able to break the partisan stalemate in Washington. “If McCain had stood up and given the best speech of his life and had people electrified to vote for him, then I’d vote for him,” she explains. “But it just so happens that it was Obama. He has touched something in me and in a whole lot of friends of mine that have never voted for a Democrat and in a lot of people who honestly would never consider voting for a black man. We all feel that something has to change, and now, for the first time, there’s the possibility that something can be different.”

Just how much difference will the defection of moderate Republicans make in November’s election? It’s hard to say. According to Larry Sabato, a professor of politics at the University of Virginia, “In presidential elections, you have between 4 and 11 percent of each party regularly defecting to the other side. Think of it the other way: That means 90 percent or more of partisans vote for the candidate of their party.” If so, McCain retains more than a fighting chance in Virginia.

“We will be very strong in the rural areas for a long time,” then-Virginia gop chairman John H. Hager told the Washington Post last winter. “It’s the nascar crowd. It’s our crowd.” Nevertheless, Virginia has been turning purple in recent years, electing Democrats like Jim Webb to the Senate, and Mark Warner followed by Tim Kaine to the governor’s mansion.

In late June, Obama’s campaign manager, David Plouffe, told reporters that he expects to put significant effort (read: money) into the fight for states like Virginia, noting that if Obama wins Iowa in addition to the states won by John Kerry in 2004 he could reach the White House by bagging just a couple more medium-size swing states. And, Plouffe added, in purple states like Virginia the campaign will be relying on Republican and independent Obama enthusiasts to proselytize to friends and relatives as part of a “persuasion army.”

So DeCourcy and other Virginia Obamacans are not mere political oddities. Whether they realize it or not, they are part of Obama’s grand plan for victory.