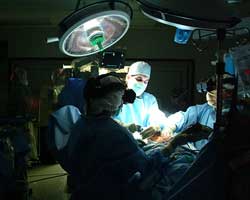 In February 2007, William Winkenwerder Jr. announced he was stepping down from his post as assistant secretary of defense for health affairs following a press conference in which he downplayed the Walter Reed scandal as a mere “quality-of-life experience.” In the months that followed, it seemed clear that Winkenwerder’s negligence may have been partly to blame for the deplorable conditions at the military hospital. Now, more than a year and half after his departure, Winkenwerder’s legacy lives on in a multibillion-dollar Defense Department medical-records management system that many military doctors believe is fatally flawed. One military physician, speaking anonymously, calls it “another Walter Reed-type scandal.”

The story of the Armed Forces Health Longitudinal Technology Application, or AHLTA, begins in 1997, when the Pentagon began to develop an updated version of the Composite Health Care System, a bare-bones electronic medical records (EMR) management program it had been working on for a decade to help military hospitals keep track of their patients. In 2000, the DOD signed a $60.6 million contract with an IT firm called Integic for the initial design and installation of an improved “CHCS II” system.

The Defense Department approved CHCS II in 2002. It introduced the system into military facilities in January 2004, under Winkenwerder’s oversight. By spring of that year, clinicians were already complaining that CHCS II processed data too slowly to be useful. Dissatisfaction grew vocal enough to raise rumors that the Pentagon was going to suspend use of the new system until it could be brought up to par.

The military stuck with the system until November 2005, when Winkenwerder, who oversaw all DOD health care, held a press conference rechristening the system “AHLTA.” “We have put a new name on what we are doing because it is not a ‘version two’ of anything, but an entirely new system,” he said. But AHLTA was CHCS II, warts and all—and a new name couldn’t hide the program’s problems.

Over the course of AHLTA’s implementation period, which has continued through this year, military doctors have grown increasingly disgruntled with the system. They complain that AHLTA is difficult to use, error prone, and slow, and that it has too many nonsensical tics such as an inability to capture patient data unless the patient stays in a hospital overnight.

According to AHLTA’s critics, one of its biggest failings is its inability to share patient data with VistA, the records-management system that Veterans Affairs has used for the past 25 years. When patient databases can’t communicate with each other, soldiers suffer: At least part of the reason why patients languished at Walter Reed was a lack of coordination between Army personnel and medical records.

Unlike AHLTA, VistA has been a huge success. Research from the University of Washington and the VA shows that it has enhanced VA productivity, reduced costs, and improved prescription accuracy to a remarkable 99.997 percent. Given its stellar performance, VistA is considered a model from which the military could expand its use of EMRs to include active soldiers as well as veterans.

But Winkenwerder championed the private-sector solution. Like many Bush administration appointees, Winkenwerder was plucked from industry. An MD/MBA, he never served in the military and was a vice president of Blue Cross Blue Shield, New England’s largest private health insurer, before arriving at the DOD. Winkenwerder was proud of his corporate pedigree: During his nomination process, he told the Senate that “coming from the private sector, I am…confident in the ability of private health care contractors to [provide]…high quality services.” (Winkenwerder did not respond to an interview request.)

Despite a growing consensus among military doctors that Integic’s product was a bust, Winkenwerder and the Pentagon kept pushing forward on AHLTA. Winkenwerder even took the unusual step of hiring the PR firm Edelman to drum up media attention for the system and brushed off complaints from clinicians. In 2006, even Stars and Stripes—a military newspaper subsidized by the Defense Department—noted that Winkenwerder had “ignored a rising chorus of critics” and “volunteered only praise” for AHLTA.

This stubbornness has shaken military medical staff, many of whom view AHLTA as an impediment to providing quality care. According to the military physician, internal polls cite AHLTA as “the biggest issue of concern for military clinicians,” and “while Walter Reed is a more visible scandal, this failure actually impacts [soldiers’] health more,” since doctors across the military are using an unreliable system to manage patient records.

The AHLTA debacle hasn’t come cheap. So far the Pentagon has invested an estimated $5 billion of taxpayer money in the project. This figure includes the original Integic contract and other corporate handouts such as a $67.7 million follow-up contract for “monitoring” and “management” with Northrop Grumman—which bought out Integic shortly before AHLTA was announced—and another $12.3 million to Northrop and Booz Allen Hamilton for aid in assessing how AHLTA and VistA can share data.

Meanwhile, it would have probably been easy—and vastly cheaper—if the Pentagon had simply used VistA in the first place. In April, Phillip Longman, a senior fellow at the New America Foundation and author of Best Care Anywhere: Why VA Health Care Is Better Than Yours, told the tech website ZDNet that the government “could wire Walter Reed or Bethesda (the two biggest military hospitals) for VistA in an afternoon. Technically, there’s no big problem.” In fact, VistA’s code is so flexible that it’s even been adapted for use in other countries. “Yet,” said Longman, “there are DOD people who have built their careers on AHLTA and want people to switch to their system.”

Winkenwerder was one of those people, going so far as to reject criticism from members of Congress who expressed frustration at the Defense Department’s tunnel vision. In 2006, then-chairman of the Senate Veterans’ Affairs committee Sen. Larry Craig (R-Idaho) noted “that [since the] VA has an award-winning, highly-touted [EMR system]…I have to wonder whether DOD is just trying to justify the agency building its own system.” In response to pressure from legislators, Winkenwerder had one of his deputies send a letter to Congress insisting that adoption of VistA would be too expensive and time-consuming.

The Pentagon has often relied on this excuse when defending AHLTA. Last year, Government Executive magazine reported that, in order to promote use of AHLTA, the Defense Department was blocking military doctors from accessing a new patient-tracking system that operated through the Internet. Like VistA, this system was embraced by the VA and has been touted by doctors as being more efficient than AHLTA. It cost just $320,000 to develop and an additional $2 million a year to maintain, and because it’s accessible through standard Web browsers instead of complex software, it’s more useful on the battlefield.

When Lt. Colonel Mike Fravell, who developed the alternate system while serving as the chief information officer of the military’s Landstuhl Medical Center in Germany, spoke out against the Pentagon’s obstructionism, he was first transferred to South Korea and then to a post just outside of Washington, DC—or, as one congressional source put it to Government Executive, “bureaucratic Siberia.” When Congress confronted the Defense Department about its attempt to quash use of Fravell’s system, the military claimed that AHLTA couldn’t integrate with the tracking system without more time and money—in this case, $30 million more. Battlefield medics were livid: “It is time to say, ‘the emperor has no clothes'” when it comes to AHLTA, one combat surgeon told Government Executive last year.

In June, military doctors got their chance to do just that when Winkenwerder’s successor, S. Ward Casscells, held an online town hall for clinicians to weigh in on AHLTA. The forum received almost 200 comments, the vast majority of them negative.

One colonel declared, “I remain completely disappointed. AHLTA…[is] slow, inefficient, unreliable, and in every respect an inferior product.” Another colonel blasted the DOD for being too concerned with “rice bowls”—military slang for pet projects—and a captain urged the Defense Department to “save money and incorporate the VA system.” Another military clinician agreed, saying that it’s “time to cut our losses and switch to the VA EMR.”

In July Casscells called the town-hall outpouring “shocking” and “galvanizing,” and announced that it was time “to find an alternative…to AHLTA.” Even so, that alternative won’t be the VA’s program, but rather a so-called “converged evolution” of AHLTA and VistA. In other words, the two systems will be gradually tweaked so that they can work together. Still, Casscells admits that VistA is “much more popular with the doctors,” which suggests that AHLTA will become more like the VA’s system, rather than vice versa.

But making these systems interoperable will come at enormous taxpayer expense: Casscells says the price tag for convergence will be another $15 billion over the next several years, putting the total cost of AHLTA somewhere in the realm of $20 billion—four times what the government had originally budgeted for the entire AHLTA process. “There’s been plenty of blame to go around,” Casscells said at a forum on military health care last month. “Nobody’s gonna like it.”

Nobody except perhaps the Pentagon contractors, including Northrop Grumman, who stand to make additional billions off the project.

For his part, Winkenwerder, who boasted that the system “works” and “is improving care” in an October 2007 interview, is still touting the success of AHLTA. His profile at Deloitte Consulting, where he serves as a senior adviser, proudly claims that he oversaw “the world’s…most sophisticated electronic health record system.”