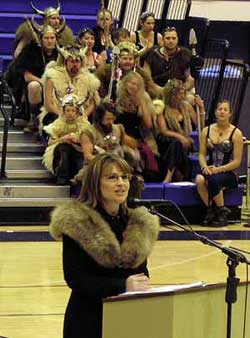 Alaska’s getting pretty crowded…with investigative reporters and scandal-chasers. Last night, at receptions, hotel bars, and restaurants, journalists covering the Gustav-delayed Republican convention were chewing on nothing but the Sarah Palin soap opera and discussing which reporters had been deployed to the northernmost state to dig for more dirt on John McCain’s not-so-vetted running-mate. What might be most frightening for the McCain camp is that the National Enquirer reportedly has dispatched a scandal SWAT team to Alaska. Given the tabloid’s success with the John Edwards scoop (and its ability to pay cash for tips and information), should Palin fans be biting their nails?

It is, of course, possible for Palin to rise above all the recent unpleasantness by wowing the convention–and the viewing public–with a heckuva speech on Wednesday night. It will probably be the most anticipated vice presidential acceptance speech in decades. But there will still be another ritual for Palin to go through: her first press conference with the national media.

In past elections, controversial veep picks have not fared well during these coming-out sessions. In 1992, Dan Quayle raised more doubts about himself after his first grilling by the national press. In 1984, Geraldine Ferraro flopped during a press conference that focused on her husband’s controversial business dealings.

As governor of Alaska, Palin has been quite accessible to the Alaskan media. But since McCain selected her, she has not. And the question is how soon after her acceptance speech will the McCain campaign make her available for questions. (And the questions ought to not focus on only the baby stuff; there’s the investigation into whether she improperly applied to get her former brother-in-law fired as a state trooper, there’s her connections to the Alaska Independence Party, which advocates Alaska’s secession from the United States, there’s her experience–or inexperience–in foreign policy, and much more.) Will the campaign let the media question her right after the convention? Or does it want to put this obligatory exercise off for longer?

On Monday night, I encountered Mark Salter, a top McCain adviser, outside the St. Paul Hotel, and I asked him when Palin’s first press conference would be. He did not seem eager to talk about it. “After the convention,” he said. Soon after the convention? “After,” he repeated. Whenever it occurs, it will be some session.

Photo by Ryan McFarland used under a Creative Commons license.