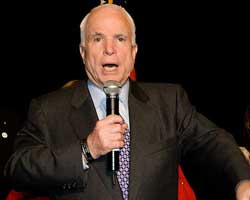 John McCain railed against Fannie Mae and Freddie Mac on the campaign trail today, saying that the CEOs that led the lenders to ruin “deserve nothing” and should have to pay back their severance packages. In an Wall Street Journal op-ed co-bylined by his vice presidential pick, Sarah Palin, McCain suggested bold reforms for Fannie and Freddie that would “terminate future lobbying, which was one of the primary contributors to this great debacle.”

If that’s the case, McCain should look first to his campaign staffers as the cause of that debacle. One of them was Fannie Mae’s head of lobbying, and spread tens of millions of dollars around Washington in the form of lobbying contracts. A number of McCain staffers were on the receiving end of those contracts, collecting hundreds of thousands of dollars each from the lenders to rep their interests. And McCain’s campaign manager served as president of a lobbying association that fought to protect Freddie Mac and Fannie Mae from the sort of regulation that McCain is now proposing.

In McCain’s op-ed in the Journal, he and Palin wrote:

For years, Congress failed to act and it is deeply troubling that what we are seeing is an exercise in crisis management rather than sound planning, and at great cost to taxpayers.

We promise the American people that our administration will be different. We have long records of standing up to special interests…

But McCain’s own campaign staffers are those special interests, a fact that casts doubt on both McCain’s hiring judgment and his ability to pursue tough reforms of Fannie and Freddie.

Aquiles Suarez, listed as an economic adviser to the McCain campaign in a July 2007 McCain press release, was formerly the director of government and industry relations for Fannie Mae. The Senate Lobbying Database says Suarez oversaw the lending giant’s $47,510,000 lobbying campaign from 2003 to 2006.

And other current McCain campaign staffers were the lobbyists receiving shares of that money. According to the Senate Lobbying Database, the lobbying firm of Charlie Black, one of McCain’s top aides, made at least $820,000 working for Freddie Mac from 1999 to 2004. The McCain campaign’s vice-chair Wayne Berman and its congressional liaison John Green made $1.14 million working on behalf of Fannie Mae for lobbying firm Ogilvy Government Relations. Green made an additional $180,000 from Freddie Mac. Arther B. Culvahouse Jr., the VP vetter who helped John McCain select Sarah Palin, earned $80,000 from Fannie Mae in 2003 and 2004, while working for lobbying and law firm O’Melveny & Myers LLP. In addition, Politico reports that at least 20 McCain fundraisers have lobbied for Fannie Mae and Freddie Mac, pocketing at least $12.3 million over the last nine years.

For years McCain campaign manager Rick Davis was head of the Homeownership Alliance, a lobbying association that included Fannie Mae, Freddie Mac, real estate agents, homebuilders, and non-profits. According to Politico, the organization opposed congressional attempts at regulation of Fannie and Freddie, along the lines of what John McCain is currently proposing. In his capacity of president of the group, Davis went on record in 2003 and insisted that no further reform of the lenders was necessary, in contradiction to his current boss’s sentiments. “[Fannie and Freddie] are subject to an innovative and stringent risk-based capital stress test,” Davis wrote. “The toughest in the financial services industry.”

At a campaign rally Wednesday morning in Fairfax, Virginia, John McCain said that the heads of Fannie Mae and Freddie Mac ought to give back the millions of dollars they’ve earned. What about the lobbyists who helped Fannie and Freddie game the system? Maybe McCain can ask them — at the next campaign strategy meeting.