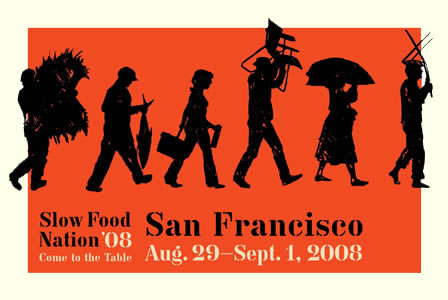 On Sunday night I attended a six-course feast at Camino restaurant in Oakland. The $125-dollar-a-plate dinner—a benefit for the West Oakland food-justice nonprofit People’s Grocery—came at the end of Slow Food Nation, the San Francisco Bay Area’s weekend-long celebration of all things local, seasonal, and delicious.

The mood was jolly, the dining indulgent. From the spongy, triangular nettle-cake appetizers to the flaky peach and blackberry handpies for dessert, the plates just kept coming out of Russell Moore’s (formerly of Chez Panisse) open kitchen. Once the diners—an older, mostly local crowd—were seated, epi loaves (long rows of linked baguette rolls shaped to looks like a stalk of wheat) were placed directly on the table, no plates necessary. Soon after, the wait staff brought out fire-roasted squid served with plump, fresh chickpeas. Then, onto the soup course—a cool gazpacho of sweet tomatoes. Hearty fish paella, which had been roasted over the open fireplace in three massive terracotta pots for hours, came steaming out next. Even after that thick, creamy rice dish, few of us could resist the rosemary-scented roasted pork and homemade sausages that arrived for our fourth course. Beans from People’s Grocery’s Sunol farm made for a perfect pairing—crisp veggies and piquant meat. An organic salad with fresh ricotta preceded the aforementioned handpies.

Just as we were finishing dessert (and ready to burst), Brahm Ahmadi, executive director of People’s Grocery, presented a seven-minute video. While we digested our enormous gourmet dinners, we learned about West Oakland, a community of 30,000 where there are zero grocery stores but 53 liquor stores. Heart disease remains the leading cause of death. And an estimated $30 million worth of business leaves the community each year as residents must go elsewhere for food.

We knew coming in that a portion of each ticket would go to People’s Grocery, but I got the sense that even after Ahmadi’s presentation, most of us diners still felt a world away from the ‘food desert’ outside Camino’s doors. After a cheer for Camino and People’s Grocery, one woman called out, “Support businesses in neighborhoods you’re scared of!” An awkward silence followed.

But Ahmadi didn’t miss a beat. In fact, he addressed the issue of class tension head on with a frank discussion of his mixed feelings about Slow Food Nation: The festival’s organizers, he said, were “struggling and trying to understand food justice” but they had “a long way to go.” Just two months ago, SFN asked Ahmadi for advice on attracting a diverse crowd. He told them to start by hiring leaders who look more like the people they want to attract.

Involving a community in a food revolution, though, takes more than two months. Ahmadi and his crew should know: Since its founding in 2002, People’s Grocery has grown from three concerned residents into an efficient food-justice task force, establishing urban gardens, nutritious snack programs in local schools, youth camps, and adult cooking classes for people in West Oakland. Since 2006 they’ve had a two-acre farm, which provides low-income families with a crate of fresh produce every week. Their next goal is to start a worker-owned grocery store that would improve food access and help the local economy.

I left feeling like a glutton. While the dollars raised for People’s Grocery surely helped the organization financially, expressing our commitment through eating felt shallow. After I talked with Ahmadi, one thing was clear: It’ll take much more than an utterly mammoth meal—and probably even more than a whole Slow Food weekend—to fix West Oakland’s food desert for good.