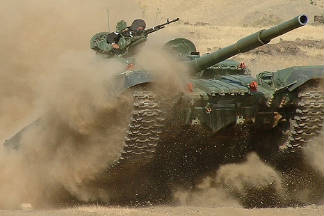 In the market for a T-72 battle tank? Well, there are some folks in Somalia who are standing by to take your order. Yesterday, a band of pirates in speedboats, armed with AK-47s and RPGs, attacked a Ukrainian cargo ship passing through the Gulf of Aden. The ship carried a crew of 21, bound for Mombasa, Kenya. It also carried—to the pirates’ surprise and delight, one should think—a cargo of 33 Russian battle tanks, large amounts of ammunition, and assorted parts for armored personnel carriers.

The shipment’s intended final destination remains unknown (reports indicate Kenya or South Sudan), but it has probably been secreted to Eyl, a town in Somalia’s Puntland region, a haven for pirates that has, says the BBC, “a flourishing local industry” based on ransoming stolen ships and cargoes back to their rightful owners.

Somalia has surpassed the Philippines and Indonesia as the world’s most active piracy zone. There have been 61 attacks in the Gulf of Aden so far this year, and pirates are now holding 14 ships and more than 300 people for ransom. And not without reason. In Somalia, which has been without a functioning government since 1991, warlords rule the day and the black market is virtually the only market. Ships full of expensive merchant goods are constantly floating past on their way to or from Red Sea ports, and pirates recognize the opportunity. The UN estimates that their take exceeds $100 million a year.

Such large hauls have only grown larger in the last few months. Pirates, emboldened by their success, have raised their ransom prices. Whereas in the past they might have been happy with a few hundred thousand dollars, they now regularly demand in excess of $1 million, this after negotiations that typically last up to three months—costing shipping companies considerably more for days their vessels remain inactive. It’s not surprising then that insurance premiums for sending ships through the Gulf of Aden has ballooned from $900 a year ago to $9,000 today.

The international community doesn’t seem to know what to do about the problem. France, which has already twice deployed its special forces to combat pirates (even capturing a pirate crew, which it is now preparing to prosecute in a French court), has urged that nations deploy warships to the Gulf of Aden to bring things under control. There have been few takers. Russia, though, appears to have seen the light: it deployed a warship this morning to protect future shipments from attack.

Photo used under a Creative Commons license from cell105.