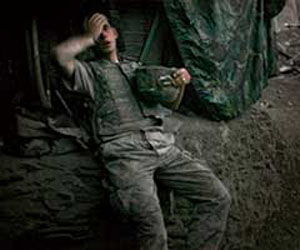 
That the Bush presidency has placed an enormous strain on the nation’s armed forces is hardly news. (The “active army is about broken,” Colin Powell told cbs‘s Face the Nation as far back as 2006.) Less frequently noted are the long-term consequences of Iraq and

Afghanistan for the military—consequences that could last, many experts now say, for a generation or more. Five signs of a military in trouble:

operation overload
“We’ve got too much war and too few warriors,” says Andrew Bacevich, a West Point graduate and Vietnam vet who is now a professor of international relations at Boston University. “The contingencies in Iraq and Afghanistan are consuming the Army and Marine Corps.”

Indeed, Army combat units now spend 15 months in theater for every 12 months at home, while the Marines, a far smaller force, deploy at the brisker pace of seven months in, seven months out. (Soldiers would ideally spend a minimum of two months at home for every one in the field, according to Pentagon planners.) And the same personnel are deployed over and over again to Iraq and Afghanistan—sometimes against their will, thanks to “stop loss” orders that extend their tours. Or, says T.X. Hammes, a retired Marine colonel and Iraq War veteran, “A guy can deploy with a brigade, spend 15 months in Iraq, then come home and 6 months later be transferred to another unit that is deploying to Iraq for 12 to 15 months.” About 80 percent of National Guard and Reserve troops have been deployed to Iraq and Afghanistan at least once; Lt. General Steven Blum, chief of the National Guard, has said his force is “in an even more dire situation than the active military.”

The Army has even sought “sandbox sailors” from the Navy, one of whom told a reporter, “I was trained for 22 years to go to war on a ship. But they gave me a rifle and a pair of boots and said, ‘Go to the sand.'”

spare a tank, brother?
The approximately 30,000 combat vehicles and 500 helicopters the Army and Marine Corps have deployed in Iraq and Afghanistan are operating at between three and six times their peacetime tempo, reports the Congressional Budget Office, and the harsh desert heat and blown sand further increase the wear and tear. Stateside units, meanwhile, are scrambling for vital gear—a particular problem for National Guard and Reserve forces. Kansas governor Kathleen Sebelius cited shortages of Humvees and trucks as an impediment to the recovery effort after a tornado leveled the town of Greensburg in May 2007. “We’re missing all kinds of equipment that could help us respond to this kind of emergency.”

The Congressional Research Service has noted that the shortage also forces soldiers to train with different gear than they use in the field. “If somebody says, ‘Why don’t you guys drive around on trucks and pretend they’re tanks?’ one could still gain some value from using substitute equipment,” says Bacevich. “But you lose something if you’re not on the real stuff, doing the real deal.”

o captain!
To meet current operational demands, the Army intends to expand by 65,000 troops in the next several years—growth that will require commissioning new junior officers, whose retention serves as a barometer of the overall health of the military. “We are very concerned about one subset of the population, and that is the young captains, of whom we’ve asked a great deal,” General David Petraeus acknowledged to a congressional panel in April. Among junior officers, the attrition rate stood at just 5.7 percent in 2003. By 2005, it reached a high of 8.5 percent before trailing off slightly, thanks in part to new cash and educational incentives. Still, Pentagon planners say, the Army has roughly half the number of senior captains it requires, and at current levels of recruitment and retention, expects to be short about 3,000 captains and majors until at least 2013. To fill the void, it has accelerated the rate at which lieutenants can make captain, and competition for senior officer posts has slackened. Today, almost all captains are promoted to major as soon as they become eligible. As one disgruntled officer told the Washington Monthly, “If you breathe, you make lieutenant colonel these days.”

a few mediocre men
As the military has lowered its promotion standards, it has taken a similar approach toward recruiting. Desperate for manpower, the services have increasingly accepted recruits with criminal records. Since 2004, the number of “moral waivers” granted to enlistees—excusing a range of criminal misconduct, from breaking and entering to aggravated assault—has more than doubled. Recruiters are even “knowingly allowing neo-Nazis and white supremacists to join the armed forces,” a Pentagon investigator told the Southern Poverty Law Center in 2006.

The Army has also lowered its academic standards: According to a 2008 study by the National Priorities Project, a nonprofit, nonpartisan research group that tracks federal spending, the percentage of recruits with high school diplomas has fallen for three consecutive years, and the number of recruits scoring in the upper half of the Armed Forces Qualification Test, those described by the Pentagon as “high quality,” has dropped nearly 25 percent since 2004.

head wounds
By last spring, post-traumatic stress disorder had become so prevalent among troops who have served in Iraq and Afghanistan that Defense Secretary Robert Gates said the Pentagon was considering listing it as a “qualifying wound” for the Purple Heart. One in five returning soldiers has reported ptsd symptoms, according to a recent study by the Rand Corporation, but fewer than half of them received treatment. (See “Kill and Tell“) Long term, caring for Iraq and Afghanistan vets (including disability payments) will cost nearly $400 billion, Joseph Stiglitz and Linda Bilmes predict in their recent book, The Three Trillion Dollar War.

Things are bound to get worse as pressure on soldiers keeps rising: One in five troops in Iraq and Afghanistan exhibits symptoms of depression, anxiety, or acute stress, according to a 2006 Pentagon study, and soldier suicides have risen 72 percent since 2004 to 115 last year, an all-time record. Nonetheless, in 2006, the Pentagon determined ptsd to be a “treatable” disorder, enabling the brass to deploy sufferers back to the front lines. According to the Hartford Courant, one of them, after being declared unfit for duty and placed on suicide watch in Walter Reed’s psych ward, was redeployed to the Middle East, where he wrote in an email to his family, “I ask myself what the F*** am I doing here?”