One of the narratives the blogs are talking about this week is that Joe Biden is—gasp!—”gaffe-prone.” Nevermind the fact that this has been the story about Biden for 30 years: now journalists are even finding gaffes where none exist. In a post on The Stump exploring Biden’s unfortunate attack on his own campaign’s ad, Michael Crowley claims that this Joe Biden anecdote is a “gaffe”:

In an unsigned follow-up post on The Plank (accompanied by an awful Slate-style “gaffe meter”), someone claims that this quote “could teeter into Hillary-in-Bosnia territory.” But what exactly is wrong or misleading or inaccurate about Biden’s story? The Jake Tapper post Crowley links to is an admirably straightforward fact-check of the story—it turns out Biden’s helicopter was forced down by a snowstorm. But did Biden say the helicopter was “forced down under fire” or even “shot at”? No. And Tapper points out that Biden went on, saying this:

[John McCain] says he’ll follow [Al Qaeda] to the gates of hell. You don’t have to go to hell. Just go to Pakistan. Just go to that area. That superhighway of terror that exists between Afghanistan and Pakistan.

Biden’s right on in the rest of the quote, too: As far as we know Al Qaeda and bin Laden are in what Biden calls, “That superhighway of terror that exists between Afghanistan and Pakistan.”

The difference between this “gaffe” and Hillary Clinton’s Bosnia sniper story is obvious. She said she “remember[ed] landing under sniper fire.” That was demonstrably false. Joe Biden said his helicopter was forced down. That’s demonstrably true. It’s not a gaffe, or a lie, or an exaggeration—it’s a description of what happened. What are Biden’s detractors suggesting, anyway? That Biden was saying he was in danger when he wasn’t? First of all, he didn’t say anything about being under fire or in danger. Second, the “forced down” language that the right seems to be so fired up by is fairly common in these situations. Like, for instance, the original press reports of the emergency landing:

BAGRAM AIR BASE, Afghanistan, Feb. 21 (UPI) — A helicopter carrying three U.S. senators made an emergency landing in Afghanistan because of bad weather Thursday, aides to the senators said.

CNN reported the chopper carrying Sens. Joseph Biden, D-Del.; John Kerry, D-Mass.; and Chuck Hagel, R-Neb., was forced down in a snowstorm in the mountains. Kerry spokesman David Wade told CNN the senators, all members of the Senate Foreign Relations Committee, were then taken by convoy to Bagram Air Base, from where they left for Ankara, Turkey. [Emphasis added.] 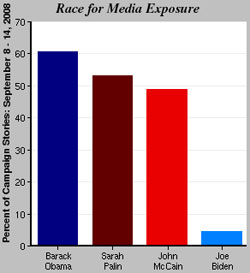 The Boston Globe headline at the time also used “forced down.” Biden was unquestionably in more danger than Hillary Clinton was when she landed (in an airport) in Bosnia, and he didn’t even say he was in danger. And while Chuck Hagel, who was also on the helicopter, said he “felt” no danger during the incident, it still “took a ‘large convoy’ more than three hours to reach the senators and their aides,” according to the Omaha World-Herald (which also used “forced down,” by the way). And even Hagel was quick to point out that “it’s still a war zone, there’s still Taliban.” Let’s be clear here: Biden, Kerry, and Hagel were unexpectedly on the ground in Afghanistan. That seems like a pretty good way to end up dead. If anything, Biden is under-selling this anecdote.

Biden’s had a rough couple days, but it’s unfortunate that he only gets media attention when he screws up. He’s been on the trail, working away, without a scrap of media coverage. (See the Project for Excellence in Journalism chart to the right, which depicts news coverage of the four candidates for the week of Sept. 14-18.) Now that Biden’s said a few dumb things, he’ll undoubtedly get more coverage. But despite everyone’s urge to jump on the bash-Biden bandwagon, it’s not fair to turn non-gaffes into gaffes. That’s what’s happening here. Poor Joe just can’t win.