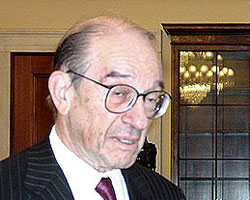 In a congressional hearing room on Thursday, former Fed Chairman Alan Greenspan, one of the most influential civil servants of the past century, saw his stock plummet—and his entire career lose its moorings. More important, the ideological battle over economic theory and the role of government in markets—a fight that has played out in the current presidential campaign—took a historic turn.

With members of the House oversight and government reform committee blasting Greenspan for his past decisions that helped pave the way for the current financial crisis, he acknowledged that his libertarian view of markets and the financial world had not worked out so well. “You know,” he told the legislators, “that’s precisely the reason I was shocked, because I have been going for 40 years or more with very considerable evidence that it was working exceptionally well.” While Greenspan did defend his various decisions, he admitted that his faith in the ability of free and loosely-regulated markets to produce the best outcomes had been shaken: “I made a mistake in presuming that the self-interests of organizations, specifically banks and others, were such as that they were best capable of protecting their own shareholders and their equity in the firms.”

In other words, whoops—there goes decades of Ayn Rand down the drain.

Democrats on the committee made Greenspan eat ideological crow. And after the hearing, Democratic Senator Dianne Feinstein of California released letters Greenspan had written to legislators in 2002 and 2003 that now cast the former chief banker as out of touch with financial reality.

Back then, Feinstein was pushing for regulating financial instruments known as derivatives—particularly those called swaps. In 2000, Republican Senator Phil Gramm, then the chairman of the Senate banking committee, had used a sly legislative maneuver to pass a bill keeping swaps free from federal regulation. (Lobbyists for financial firms had helped to write the bill.) The swaps market subsequently exploded, as financial firms bought and sold swaps as insurance to cover their trading in subprime securities and other freewheeling financial products. In a nutshell: the rise of unregulated swaps enabled the growth of the shaky subprime securities at the heart of the current financial crisis. Greenspan was an ardent supporter of keeping swaps virtually unregulated.

In 2001, Enron, having gone crazy with energy derivatives, collapsed—after the firm had manipulated the California electricity market, costing residents of Feinstein’s states billions of dollars. Following that fiasco, Feinstein decided the derivatives market needed to be reined in. As The Wall Street Journal reported in 2004, “When she telephoned Mr. Greenspan for support, he declined, telling her the proposal threatened the multitrillion dollar derivatives industry, which he considers an important stabilizing force that diffuses financial risk.”

We believe that the [over-the-counter] derivatives markets in question have been a major contributor to our economy’s ability to respond to the stresses and challenges of the last two years. This proposal would limit this contribution, thereby increasing the vulnerability of our economy to potential future stresses….

We do not believe a public policy case exists to justify this governmental intervention. The OTC markets trade a wide variety of instruments. Many of these are idiosyncratic in nature….

While the derivatives markets may seem far removed from the interests and concerns of consumers, the efficiency gains that these markets have fostered are enormously important to consumers and to our economy.

Greenspan and the others urged Congress “to be aware of the potential unintended consequences” of legislation to regulate derivatives.

They got it exactly wrong. Swaps and derivatives ended up undermining, not bolstering, the economy.

Feinstein was not convinced by Greenspan’s argument, and she continued to press for legislation to regulate swaps. And Greenspan continued to resist. In a June 11, 2003 letter—also signed by the new Treasury secretary. John Snow, the new SEC chairman, William Donaldson, and CFTC chairman Newsome—Greenspan praised derivatives and called them an essential part of the economy:

Businesss, financial institutions, and investors throughout the economy rely upon derivatives to protect themselves from market volatility triggered by unexpected economic events. This ability to manage risks makes the economy more resilient and its importance cannot be underestimated. In our judgment, the ability of private counterparty surveillance to effectively regulate these markets can be undermined by inappropriate extensions of government regulations.

They were asserting that government regulation undercuts market-driven self-regulation. But as events have demonstrated, unregulated swaps did not protect Big Finance firms; they weakened the entire financial industry in the United States and overseas.

In a November 5, 2003 letter, signed only by Greenspan, the Fed chair again took a shot at Feinstein’s proposal to control derivatives. He noted that “enhanced market discipline” would address concerns about the manipulation of markets.

Before the oversight committee, Greenspan said that he had been “partially” wrong to believe that swaps did not need regulation. But he did seek cover by claiming he had not been alone in screwing up: “The Federal Reserve had as good an economic organization as exists. If all those extraordinarily capable people were unable to foresee the development of this critical problem…we have to ask ourselves: Why is that? And the answer is that we’re not smart enough as people. We just cannot see events that far in advance.”

But not everyone got it wrong. In the late 1990s, regulators at the CFTC wanted to regulate swaps. Gramm, Greenspan and others—including senior members of the Clinton administration—did not. Following the Enron debacle, Feinstein took a run at this. But Greenspan and Bush administration officials said no. And it was not an issue of smarts; it was a matter of ideology.

In fact, it was always a matter of ideology for Greenspan, a libertarian champion. In 1963, writing in Rand’s “Objectivist” newsletter, he noted, “It is in the self-interest of every businessman to have a reputation for honest dealings and a quality product.” Regulation, he maintained, undermines this “superlatively moral system.” Self-governance by choice, he said, would be more effective than governance through government. Regulation, Greenspan maintained, was the enemy of freedom: “At the bottom of the endless pile of paper work which characterizes all regulation lies a gun.”

Well, it turns out that at the bottom of the system that Greenspan oversaw for years, there was nothing but a pile of bad paper. And testifying to the House oversight committee, Greenspan, one of the more ideological Washington players of the past few decades, essentially said that Ayn Randism had let him—and the entire world—down. It was truly a God that failed.