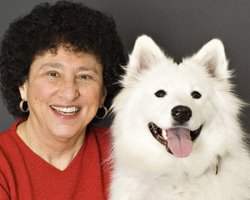 If she had any pets, food safety expert Marion Nestle says she would still feed them pet chow—even though her newest book, Pet Food Politics: The Chihuahua in the Coal Mine, chronicles how melamine-laced chow killed more than 4,000 animals last year. Human food, on the other hand, might be a different matter.

Nestle knows well the American politics of salmonella outbreaks and melamine-in-baby-formula panics, having served on both FDA and USDA advisory committees. In this podcast, she talks with Mother Jones about why vegetables should scare us more than meat, how the Scandinavians do it better, and the pros and cons of a system designed for astronauts.

MJ: I was surprised to learn that the FDA only inspects 1 percent of imports, and unlike toys, food cannot be [mandatorily] recalled. What do you think Americans would be most surprised to find out about their food safety laws?

MN: I think that we don’t really have any that protect the food supply from farm to table. We have a food safety system that’s piecemeal, largely divided between two agencies that don’t talk to each other very much. Neither agency can enforce regulations from the farm to the table.

MJ: How does our food safety system compare to systems in Europe?

MJ: What is better about those other systems that the GAO pointed out?

MN: They have food safety systems from farm to table. Everybody involved in the food supply is required to follow standard food safety procedures. You would think that everyone involved with food would not want people to get sick from it. But when you have a food safety system that’s voluntary and not mandatory, you’re in a situation in which everybody wants everybody else to go first. So as a normal course of doing business, food companies cut corners and don’t want to take the kind of trouble and the kind of testing and the kind of careful procedures that are required to produce the safe food because they don’t have to.

MJ: Considering food safety laws, where would you prefer to live? Is there a certain state, a different country?

MN: Well, I live in the United States, and I’m not moving. But from the standpoint of food safety, the countries in Scandinavia do it better than we do. It’s not that they don’t have food-poisoning incidents; it’s that there are many fewer in proportion to the population.

MJ: If you could make just one change, what would you make to the food safety system?

MN: I would require every producer of food to follow and have enforced a standard safety plan. We know how to produce safe food. It has a horrible name; it’s called HACCP—Hazard Analysis and Critical Control Point—and this was a food safety system that was developed for NASA so that astronauts wouldn’t get sick in outer space. If you just think about what it might be like to have food poison under conditions of zero gravity, you don’t even want to think about it.

MJ: Could you just run down HACCP really quickly for our listeners if they’re not too familiar with food safety?

MN: What it requires is that first of all you identify the hazards: Where in your production chain can contamination occur? This could be a simple matter of cooking a product to kill bacteria and making sure that the product is actually brought to that temperature. Then you identify the steps at which contamination can occur—those are the critical control points. You take steps to make sure that that doesn’t happen. And you monitor and evaluate and test to make sure that your system is working properly. And if it’s done diligently and done faithfully and monitored carefully, then they’re producing safe food. And no astronaut of which I’m aware has ever gotten food poisoning in outer space.

MJ: What should we be more worried about: vegetables or meat?

MN: Right now it’s vegetables because meat is produced under HACCP plans. Meat and poultry are required to be produced under standard food safety plans and they have been since the mid-’90s, and there are now fewer problems with meat than there used to be. That’s on the USDA’s side. But the FDA, which regulates the safety of vegetables, doesn’t have those kinds of rules because Congress doesn’t want it to. It’s not that the vegetables themselves have anything wrong with them; it’s that they’re contaminated with animal manure. One of the rationales for a single food safety agency is that you can’t separate animals from vegetables.

MJ: With the recent news of melamine in baby formula, Chinese-manufactured products remain a concern for many parents. How worried should they be realistically?

MN: Well, realistically these are always small percentages. But if you happen to be somebody who’s caught up in a small percentage, it’s not a very nice situation. I think one way in which we can encourage the Chinese government to take more vigorous action to control food safety in their country is by just saying we’re not going to buy Chinese foods until they get their system cleaned up. Admittedly it’s a difficult system to get under control because an astonishing percentage—maybe 80 percent—of the foods in China are produced in small backyard operations. But until they can get it under control and really start enforcing food safety laws, I don’t think a boycott is unreasonable at all. How are we going to do that? That would require information about country of origin, and country-of-origin labeling is coming into effect on September 30. Let’s hope that Congress insists that those laws be followed.

MJ: A lot of things are left out of that though, correct?

MN: Indeed there are. There are loopholes big enough to drive trucks through. And Congress needs to take a look at those laws and make sure that they’re much more rigorous.

MJ: Now, this past summer, the salmonella strain that sickened 1,400 people was originally traced to tomatoes, but then peppers—why does it take so long to pinpoint the food that’s making people sick that it’s often eaten by the time we begin to track down its origin?

MN: Well, there are several reasons for it. One is that we don’t have a farm-to-table food safety system. I keep saying this. It came as a big surprise to the FDA that tomatoes were being grown in the United States, sent to Mexico for packing, and then sent back. I mean, they had no idea that our food chain worked like this. The other is that it takes a while to figure out how outbreaks work. If you’re sick, first you have to associate your sickness with a food. Then you have to report it to your doctor. Then the doctor reports it to some state authority. The state authority reports it to the federal authority. By the time all that happens, two weeks have gone by.

MJ: We have a relatively safe food system though, right?

MN: Well, that depends whether you’re an optimist or a pessimist. The Centers for Disease Control says that there are 76 million cases of food poisoning in the United States every year, 350,000 hospitalizations, and 5,000 deaths. Is that a lot or a little? Well, it depends on how you look at it. From where I sit, it’s a lot, because a lot of this is preventable. But if you look at the numbers of people in the United States—350 million—times three meals a day times 365 days a year, 76 million is only a small proportion of that. On the other hand, if you’re one of the 76 million people who gets sick, if you’re one of the 350,000 who has to go to the hospital, or if you—well, I guess if it’s you it doesn’t matter—but if somebody you know dies because of food poisoning, it becomes a very personal and serious problem.

MJ: When we have huge issues like genocide, global warming, a financial meltdown, why should we be concerned with food safety?

MN: Well it’s the same thing! It’s a government that isn’t doing its job. It’s exactly the same issue. It seems to me all of these issues are greatly related. If we have a food supply that we can’t trust, that has enormous implications for the way we view government, for the way we trust business, and for our international trade relations. The pet food recall, which was after all just about pets, and treated as if it were an inconsequential matter, was an absolute forerunner of what’s going on in China, where 50,000 infants have been sickened because of a contaminated infant formula. So these things are all closely related. You cannot separate the food supply for pets, farm animals, and people, and you cannot separate problems in one area of a country from problems in another area.