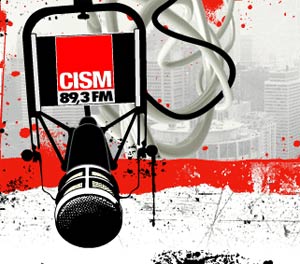 Allo, le Riff. I just got back from a quick little DJ tour of Canada, eh, and on this jaunt I had the opportunity to play in Montreal for the first time. Turns out Montreal isn’t unlike San Francisco, strangely at odds with North America but not quite European, culturally vibrant but chock full of homeless, except there they ask for change in French. In addition to Paul’s Boutique and tasty Portuguese grills, one of my happiest Montreal discoveries was CISM/89.3 FM, the radio station of l’Université de Montréal. I’m not sure why it was so good, exactly; perhaps its focus on musique en français works as a kind of limiting factor allowing a wider creative freedom within that zone, or maybe French music in general is just really awesome right now. But there was something uniquely Quebecois about CISM’s playlist–with Paris obsessed with the latest fashions in dance music, CISM is a happily grungy alternative, shifting between soaring indie rock, wobbly dancehall, avant-garde electro and bouncy hip-hop. My French is terrible, but the DJs’ Quebec accents are strong enough to be amusing even to the uninitiated, which is a little bonus bit of entertainment. Thankfully, the station is actually kind of professional, with some solid production and a good compressed sound. Moreover, if you don’t catch the name of that last song, they include archived playlists on their website for your convenience. Of course I wouldn’t be telling you this if they didn’t have a high-quality online stream: go to their website and click “écouter en direct.” Alternately, after the jump, check out some of the Quebecois artists I heard over the course of a couple days’ listening.

Donzelle
Dictionary.com says donzelle means “young miss,” and her MySpace page says she’s “armed with gilded high heels and doubtful food metaphors.” I’m not sure what that means even in English, but check out the Montreal rapper’s minimalist, purring “Dddance luso.”

Thomas Hellman
This Montreal folk singer’s MySpace page says he has roots in the French “chanson” tradition as well as American folk, and you can hear both in the wry melancholy of “La fin du monde.”

Le Chum Productions
A crew of Quebec rappers and producers making a crazy combo of crunk and freestyle, “Cocane in a can” refers to the energy drinks I’ve been known to rely on to get through a late-night DJ set.

Les Freres Goyette
The Goyette bros apparently recorded some of their new album in a house using studio equipment powered by, uh, propane. They’re like the Quebecois Hank Hill. Appropriately, a sense of fiery danger seems to hover just outside the bluesy “Charlie Tango Sierra Beta,” momentarily lighting up the song with distorted vocals and feedback. Listen here.

Petit BIG
How can you not love a band with that name? Appropriately, the band make big music with apparently little means; “Toutetatomatise” uses a distorted drum machine beat and garage-style lo-fi production to achieve a kind of ecstasy, something like the Klaxons. Listen here.

L’Indice
This Quebec singer-songwriter tosses everything into his songs: you can hear the adventurous psychedelia of Caribou, the delicate electronica of Postal Service, and the guitar freakouts of Sonic Youth. Check out “Petite Epopee” at his MySpace page.