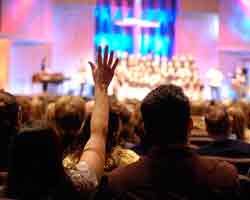 Colorado Springs is what Sarah Palin would call one of the “pro-American areas of the nation.” This mile-high city in the shadow of Pike’s Peak is home to several key military sites, including the US Air Force Academy and North American Aerospace Defense Command’s operations center. And with its huge concentration of conservative Christian megachurches and organizations, it’s become known as the “Evangelical Vatican.” The latter element was recently out in force during a Sarah Palin rally and a National Day of Prayer Summit hosted by James Dobson’s Focus on the Family. The summit was timed to take place “just days before our national and local elections” because, its organizers say, “as we look over our country, we see a land in need of the Savior, Jesus Christ,” and they want the faithful to “pray and intercede with fellow believers for this critical hour in which we live.”

This past Sunday morning, I visited the expansive campus of New Life Church, probably the most famous megachurch in America, and historically the most influential: Its founder and former pastor, Ted Haggard, headed the National Association of Evangelicals and reportedly had a direct line to the Bush White House—right up to the moment he was caught buying meth and having a dalliance with a male prostitute in 2006.

The cavernous “Worship Center” seats 7,500, and looks more like a high-tech concert hall than a church, with elaborate sound systems, TV cameras, screens scrolling biblical texts, and a backdrop that changes from light blue to crimson to a simulacrum of a traditional church, stained glass and all. Two armed city cops stood guard at the door, and for good reason: Last December, a young man who had been bounced out of a missionary training program near Denver opened fire at the end of a service, killing two and wounding three others before taking his own life.

The boisterous parade of people flowing into the hall looked more like the crowd at a football game: Young women with low-cut blouses, men in shorts, their bellies bursting out of T-shirts, a Vietnam vet in a motorcycle jacket with the word “Sniper” boldly etched on it. There were very few suits. As the service began, the nine-piece Desperation Band laid down the Christian beat, a choir of some 70 people swayed in unison, and most members of the audience were on their feet, hands stretched upward in the Pentecostal reach toward God. When the music finally stopped and they collapsed into their seats, a preacher appeared and asked everyone to take their minds off their financial problems and apply a magnifying glass to God—and fork over some money to the church. Men with white plastic buckets made their way through the aisles. Some people threw in change or bills, but a surprising number gave nothing.

The elections are very much on people’s minds here. But things have changed at New Life since the last presidential race. In 2004, Haggard, who had been a guest at the White House and regularly spoke with Bush on the phone, rallied his congregation around the president, and an associate pastor at the church told a reporter, “We’re in regular contact with Karl Rove.” Congregants campaigned for Bush in “Values Vans” wearing “I’m a Values Voter” buttons. The pastor who replaced the disgraced Haggard, Brady Boyd, still urges his flock to “be a good citizen” and vote: “If you don’t vote, you’re worse than a puppy kicker,” he said at last Sunday’s service. But in a recent interview, he cited the economy, not social “values” issues, as “point number one” in the election. Even more surprisingly, he declared, “The only advice I give is pray, fast and vote, and that can be for any political party…What’s happening to us is less allegiance to the Republican Party, and more to our core principles.” These core values may include “protecting” heterosexual marriage and unborn fetuses, but they also should prompt Christians, Boyd said in a recent sermon, “to pay our neighbors’ house notes, to provide food.”

There are plenty on the Christian right who remain steadfastly in the GOP’s corner. But even on the core issues that usually unite evangelicals, there has been dissension in the ranks here in Colorado. Last year saw the beginning of highly public infighting when Colorado Right to Life, Operation Rescue, and several other organizations attacked Focus on the Family’s James Dobson for being insufficiently zealous and absolute in his anti-abortion stance. Colorado Right to Life and Operation Rescue are key supporters of a Colorado ballot measure, Amendment 48, that would define the term “person” to grant full constitutional rights from the “moment of fertilization.” But many usually reliable anti-choice allies have opposed the so-called Personhood Amendment. The Colorado Catholic Conference of bishops, for one, has cited doubts about both the measure’s “timing and content” and the groups behind it, and even National Right to Life won’t endorse it.

Despite all this, there was undeniable excitement at places like New Life about the impending visit of Sarah Palin to Colorado Springs. As I left the church grounds on Sunday, a group of men handed me a fistful of tickets for the next morning’s rally. I was there at 6 a.m. for the 8 a.m. rally, joining Palin’s supporters lined up in the predawn darkness, many of them dressed in red to demonstrate fealty to their party.

Two hours later they had filled the center of the 8,500-seat stadium (though there were still empty seats in the stands) and were kept stamping their feet in the damp cold—first to a Christian rock group and then to Hank Williams Jr., who opened with a tune tailored to the current election. In the original version of his song “Family Tradition,” Williams defended his hereditary penchant for drinking Jim Beam and smoking dope. But rewritten as “McCain-Palin Tradition,” the song encourages voters to ignore the “left-wing liberal media” and support the Republican ticket “cuz they’re just like you and ol’ Hank.” I couldn’t make out all the words, but according to others who have transcribed the lyrics, they include such gems as “John and Sarah tell you just what they think, and they’re not gonna blink, / And they don’t have terrorist friends to whom their careers are linked.” Williams even goes on to explain the causes of the financial crisis: “The bankers didn’t want to make all those bad loans, / But Bill Clinton said, ‘You got to!’ Now they want to bail out, what I’m talking about / Is a Democrat liberal hoodoo!”

Then Palin appeared, sporting a red leather jacket and producing a roar from her followers. Palin has pulled back from her riff about Barack Obama not being “a man who sees America like you and I see America,” after accusations of coded racism from the media and shouted death threats from her crowds. Now she instead offered up another American bogeyman: The Red Menace. Obama’s tax plan, Palin warned her audience, would drive the country into the socialist camp: “Obama calls it spreading the wealth,” she said. “Now is not the time to experiment with socialism. Distributing the wealth will stifle entrepreneurial spirit.”

While the crowd at the rally was totally behind their lady in red, it was easy for an outsider to wonder if this was also something of a goodbye rally for the woman who just months ago had so energized social conservatives.

Pressing a blue “Country First” placard into my hands, a middle-aged woman with intense sparkling eyes told me that despite the recent bad poll numbers for McCain and Palin she thought there was still a chance. She didn’t seem all that convinced herself, but she pointed a finger toward heaven and smiled resolutely. The decision, she said, is in the hands of God. “But what if you lose?” I asked. “We will just have to wait until he decides,” she said, again nodding toward heaven. “That might be a pretty long wait,” I said. She laughed and agreed.

Perhaps there are some here who also sense that what’s being lost is more than just a single election. The fact that the GOP ticket is trailing behind despite the addition of Palin clearly proves that while conservative Christians may be a formidable force in American politics, they can’t elect a president by themselves.

The right-wing evangelicals won in previous years because they joined a Republican coalition that also included hawkish neocons, working-class “Reagan Democrats,” libertarians, and old-fashioned fiscal conservatives. And some of those groups have clearly had enough. They are departing the flock in disgust with the Republican Party, which could leave the GOP ever more dependent on the Christian right.

Some portions of this piece originally appeared on the Guardian’s “On the Road to the White House” blog.

Photo used under a Creative Commons license from Flickmor.