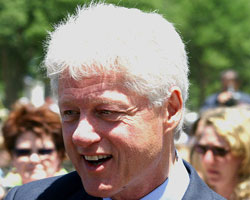 It appears to be a done deal: President-elect Barack Obama will appoint Senator Hillary Clinton to be his secretary of state. But while the Obama camp’s vetting of Bill Clinton’s foreign entanglements and activities continues, there is one thorny matter that needs to be addressed publicly: the identity of the donors to Bill Clinton’s foundation and presidential library.

The former president has raised millions of dollars from overseas officials and corporations for his foundation and library–while also pocketing mega-speaking fees from businesses abroad. (He’s also struck an unusual deal with transnational mining conglomerate head Frank Giustra.) All of this raises potential conflicts and ethics questions. The basic dilemma: can Bill Clinton receive millions of dollars from foreign nations and corporations that may have an interest in US foreign policy while his wife oversees US foreign policy? Unless Clinton opts out of his (often admirable) globe-trotting activities, this situation seems almost too knotty to be untied.

But aides to Obama and Bill Clinton aides are trying to work out rules that would govern the former president’s actions. Last week, The Washington Post reported:

Clinton advisers say they diligently worked to resolve questions. The Clinton Foundation, for instance, turned over 208,000 donor names for review by Obama’s transition team, even though many donated with promises of anonymity.

But where’s the sunshine? The Clinton Foundation merely gave the names of his donors to the Obama camp for a private review. As The New York Times reported:

People close to the vetting said Mr. Clinton turned over the names of all 208,000 donors to his foundation and library and agreed to every condition requested by Mr. Obama’s transition team, including restrictions on his paid speeches and his role at his international foundation. The lawyers agreed to notify all of the donors that their identities would be revealed to the Obama team, but it was not clear if they would all be made public.

As of yet, there’s no indication there will be true transparency regarding Bill Clinton’s donors.

If Hillary Clinton is to be the secretary of state, she will serve not just President Obama but the citizens and taxpayers of the nation. If her husband continues to solicit and bank millions from overseas sources–or domestic sources with overseas interests–the public ought to know the details. It will not be sufficient for Obama vetters to pronounce Clinton and his foundation and library clear of potential conflicts. Americans should be able to review the information and reach their own conclusions.

Is Bill Clinton willing to engage in that level of openness? This morning I contacted his office and asked if he would make the names of his donors public. So far, no reply.

As the vetting process continues, the vetters should keep in mind that the critical question is not whether they believe that the Clinton situation is free of conflicts, but whether the public can have confidence that it is.