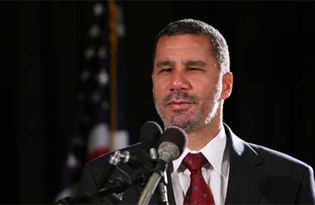 What happens when a black, liberal Democrat is chief executive during a time of financial crisis? Does he respond by slashing budgets and following a Republican-like game plan? Or does he raise revenues by taxing the rich to stimulate the economy and protect those most at risk during economic hard times? These questions don’t apply only to President-elect Barack Obama. New York state is already providing a dramatic case study, with its governor, David Paterson, desperately trying to cut his way out of the worst economic crisis his state—and New York City in particular—has faced since 9/11.

While the effects of the economic meltdown are felt nationwide, New York stands at its epicenter, and is taking the heat on two fronts: It is suffering, along with the rest of the country, from the far-reaching fallout of the Wall Street debacle, but it is also directly dependent upon the financial industry itself. Jobs, retail, services, the real estate market, and an astonishing 20 percent of the state’s tax base all rest upon the now crumbling foundation of the financial sector. The trip from Wall Street to Main Street is shorter in New York than anywhere else.
With the banking, securities, and insurance industry in free fall, the state suddenly faces a $1.5 billion budget deficit for the current fiscal year (which ends on March 31) and a projected $12.5 billion shortfall for the next one. Paterson, who presents his emergency budget package to the state legislature in a special session that begins on Tuesday, wants to narrow the budget gap by cutting $2 billion now and $3.2 billion more next year. These reductions come on top of $1.5 billion already cut from the state budget over the last year as the financial crisis deepened. (On Monday, New York’s Republican-controlled Senate and Democrat-controlled Assembly remained at an impasse over Paterson’s proposal, with members of both parties expressing concerns over some of the potential cuts.)

The largest cuts will be to Medicaid and other public health services ($572 million this year and $1.2 billion next year) and public schools ($585 million and $844 million). Union workers will be asked to defer five days of salary, forgo a 3 percent pay raise, and start paying up to half their health insurance costs. Under Paterson’s plan, New York City will lose $41 million in municipal aid—a 17 percent cut—though aid to other cities in the state will hold steady.

Meanwhile, Paterson is not chastising Wall Street for causing these problems in the first place. Instead, the accidental governor—who now wants to be reelected in a state where the financial sector is still all powerful—has depicted the finance industry as the state’s economic savior, rather than its scourge. Wall Street “bailed us out” for years, he said at a recent press conference, and now “the well has run dry.”

Paterson’s response to the crisis notably excludes from any shared sacrifice the Wall Street executives and other wealthy New Yorkers who long benefited from the boom that has gone bust. They, of course, do not use public health services and seldom send their children to public school. The only proposed budget measure that stands to affect the rich is a new 5-cent deposit on bottled water.

Most controversial is Paterson’s flat refusal to consider a reinstatement of the so-called millionaire’s tax, the temporary hike that helped bail New York out of its post-9/11 recession by boosting its 6.85 percent top income-tax rate up to 7.7 percent on incomes over $500,000. This year’s proposal for a millionaire’s tax—which was passed by New York’s State Assembly in August but killed in the Senate—targeted even higher earners: It called for a 1 percentage point increase on millionaires, and another 0.75 points on those earning more than $5 million per year. Had it become law, it could have had a significant impact on revenue, since millionaires, who account for only one-half of 1 percent of New York’s taxpayers, earn about a quarter of its taxable income. And an August poll showed that four out of five voters supported the tax.

But Paterson has said that he does not want to “drive up taxes for a constituency that has been, I would say, just battered over the past number of years.” In addition to feeling the pain of the suffering rich, Paterson may believe that a millionaire’s tax will, as Donald Trump put it, “force rich people to move to states like Florida.”

Never mind that the streets of New York still teemed with millionaires after the 9/11 millionaire’s tax. And never mind the response from billionaire Mayor Michael Bloomberg, who declared, “I can only tell you, among my friends, I’ve never heard one person say ‘I’m going to move out of the city because of taxes.’ Not one. Not in all the years I’ve lived here…My friends all want to live here and understand the value.” Even if a few millionaires were to leave, so what? When two Princeton sociology students looked at a much stiffer wealth tax increase (2.6 percent on half-millionaires) that went into effect in New Jersey, they did find a tiny increase in the “out migration” rate among these wealthy residents—but overall, the state’s tax revenue increased by $26 for every $1 lost.

In New York City, the proposed state cuts come on top of city budget cuts. Before this recession began, 28 percent of New York City’s children already lived below the federal poverty level, as compared with about 19 percent of the state’s children and 18 percent of the nation’s. Now, cuts by government and nonprofits are hurting the poor in the areas of food security, shelter, eviction prevention, medical care, child care, and heating assistance, according to Jennifer March-Joly, executive director of Citizens’ Committee for Children of New York. The group is a member of the new One New York: Fighting for Fairness, a coalition of some 90 nonprofit groups that are urging state officials “to call on all New Yorkers—not just those that depend on government services—to sacrifice” during the crisis.

The cuts will also affect the increasing number of residents who are slipping out of the middle class. According to James Parrott of New York’s Fiscal Policy Institute, in September, the state labor department upped its estimates of job loss in New York City due to Wall Street to 40,000 with 120,000 losses overall. “Jobs are declining in businesses supplying Wall Street, such as law firms, temp agencies, caterers and car services, as well as in retail,” Parrott wrote recently. As of the summer of 2008, the number of New York City workers filing for unemployment insurance had jumped by 25 percent over the prior year, while the inflation-adjusted median hourly wage in the city had fallen by 4 percent.

Yet as their city suffers disproportionately from a national fiscal crisis, rank-and-file New Yorkers will likely get little relief from Washington or Albany. In fact, the city has historically paid about 20 percent more in federal taxes and almost twice as much in state taxes than it gets back in services from those governments. The federal government couldn’t even manage to give the city a fair share of homeland security funds after 9/11. As for the state, New York is one of only two states that require cities to pick up 25 percent of the costs of Medicaid for their residents—a measure passed some 40 years ago and meant specifically to pass the burden to New York City. The state has also long fought off efforts by the Campaign for Fiscal Equity to get New York City schoolchildren their fair share of state funding. After more than 10 years of lawsuits and appeals, CFE finally won its case in 2006—but Paterson’s cuts will now undermine any gains.

Paterson, a former state senator from Harlem with a solidly liberal record, sounded like an old-school Republican on a recent trip to Washington, insisting that budget cuts and business development, not new taxes, were the only way to go. He even quoted libertarian icon Ayn Rand—whose other famous acolyte, of course, is Alan Greenspan.

By taking this position, Paterson is ignoring the advice of Joseph E. Stiglitz, the Columbia University professor and Nobel Prize-winning economist. Stiglitz is a member of the Governor’s Board of Economic Advisors, which Paterson set up in August but now seems to be using as little more than window dressing for his draconian plans. In the current crisis, Stiglitz has strongly supported a millionaire’s tax. And during the 2001 recession, Stiglitz and Peter Orszag (now the director of the Congressional Budget Office) wrote that in times of economic downturn, marginal tax increases on higher-income families are “the least damaging mechanism for closing state fiscal deficits in the short run,” while “reductions in government spending on goods and services, or reductions in transfer payments to lower-income families, are likely to be more damaging to the economy.”

The situation in New York also foreshadows what is sure to be a central conflict on the national level once Barack Obama takes office and the newly elected Congress convenes. Now that they have the power to do so, will Democrats actually be willing to raise taxes on the rich? How soon and by how much? Will they really undertake deficit spending for stimulus packages that directly benefit the poor and middle class, rather than shore up Wall Street? Or will they follow the path that is now walked by Paterson and take away more from those who have the least to spare?