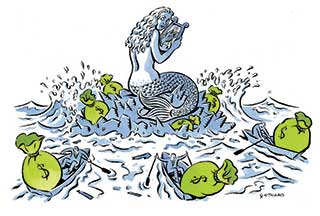 UPDATE September 12, 2012: The New York Times reports today that the IRS will pay whistle blower Bradley Birkenfeld $104 million for his assistance in helping the agency pursue UBS and divulge the secrets of the Swiss banking system. According to the Times, “In addition to paying $780 million in 2009 to avoid criminal prosecution, [UBS] turned over account information regarding more than 4,500 American clients.” This led to thousands of wealthy Americans taking advantage of a tax-amnesty program offered by the government, recovering some $5 billion in unpaid tax revenues.

The investment firm where former McCain adviser and ex-Sen. Phil Gramm serves as a vice chairman is taking heat for helping affluent Americans cheat the US Treasury out of some $2 billion—but the world might never have known had Bradley Birkenfeld not sung like a canary.

The Boston-bred Birkenfeld was a banker for UBS, a Swiss financial behemoth with major US operations. His specialty: devising tax shelters in the form of offshore shell companies and peddling them to the superrich. According to court documents, 85 to 90 bankers in UBS’s wealth-management divisions drummed up business at high-roller events like the America’s Cup yacht race and Miami’s prestigious Art Basel exhibition; Birkenfeld took pains to keep his customers happy, going so far for one client as to purchase diamonds overseas and smuggle them into the US in a toothpaste tube to avoid taxes and duties.

It was one of Birkenfeld’s biggest clients who would prove his undoing—Igor Olenicoff, a Forbes 400 billionaire and major developer in Florida, Illinois, Nevada, and the Southwest. Olenicoff’s fortunes took a dive in 1994, when the Internal Revenue Service, in the course of monitoring fund transfers, noticed large sums moving from Olenicoff’s accounts to countries with a reputation as tax havens. The suspicious IRS agents eventually called in the Justice Department; Olenicoff, they discovered, had stashed some $200 million in unreported assets in UBS accounts offshore. In 2007, Olenicoff agreed to pay $52 million in back taxes, interest, and penalties for tax evasion, and for lying about his accounts.

Once the feds had Olenicoff, it was a short jump to Birkenfeld, who left UBS in 2006 and began to cooperate. He admitted to the agents that he and fellow UBS bankers had helped Olenicoff and other wealthy clients hide their assets via fictitious firms in Switzerland, Liechtenstein, Panama, and the British Virgin Islands. Birkenfeld and a Liechtenstein banker—now a fugitive—also advised Olenicoff to destroy banking records and use only Swiss credit cards to throw Uncle Sam off the trail. In June, Birkenfeld arrived in a Fort Lauderdale courtroom in his gray pin-striped suit, looking forlorn as he pleaded guilty to charges of conspiracy and facilitating tax fraud. (He faces up to five years in jail and $250,000 in fines, but legal experts expect his sentencing will be put off as long as he continues to cooperate­.)

Birkenfeld’s takedown was a milestone for the Justice Department—its first conviction of a foreign-based banker for conspiring to defraud the IRS. But his crimes were no anomaly. More than a decade of lax law enforcement has allowed tax havens to flourish in the open, even as the Bush administration has cut taxes for the wealthy here at home. “There’s been a huge growth in the offshore game,” says Jack Blum, a DC lawyer who worked on money laundering and tax fraud as a congressional investigator during the early 1990s. “Foreign institutions are doing a lot of selling.” A new Government Accountability Office report notes that Ugland House, a five-story office building on a tree-lined street in the Caymans, has witnessed a jump in its foreign corporate entities from roughly 12,000 in 2004 to nearly 19,000 this year; around 900 are American companies.

Strapped for resources, the IRS has adopted a strategy of selective prosecution: Nail a few big fish, and hope the others will get the message. The agency plans to add 10 new audit teams to combat offshore abuses, Blum says. But some legislators, like Sen. Carl Levin (D-Mich.), say much more remains to be done. As chair of the Permanent Subcommittee on Investigations, Levin has been looking into ubs as well as lGT, a Liechtenstein bank owned by that principality’s royal family. “The IRS doesn’t have the money, the time, or the legal tools it needs to stop offshore abuses,” he told me via email.

Meanwhile, the Birkenfeld conviction has rocked the lucrative world of tax-haven promotion. The banker told Levin’s committee that ubs had even trained him in illegal procedures, and outfitted his laptop with encryption software to make its contents inscrutable to US agents. UBS doesn’t deny that its American clients keep some $18 billion in 19,000 undeclared Swiss accounts—investments that earned ubs about $200 million per year, Birkenfeld told prosecutors.

Called before Congress in July, a senior UBS exec was contrite, stating that the bank would shut down its offshore services to US clients and “take responsibility” for what he called compliance failures. “On behalf of ubs, I am apologizing. I am committing to you that we will take the actions necessary to see that this does not happen again.”

As of mid-September, UBS was working to comply with a federal “John Doe” summons seeking the names behind those 19,000 accounts. If the funds in question are indeed taxable assets, UBS’s clients may have cost the federal government $2.1 billion or more over seven years. All told, Levin estimates, offshore tax shelters deprive the Treasury of a staggering $100 billion a year.

With the economy in a slump and America’s coffers drained by war spending, some congressional Democrats have been talking tough about tax cheats. Levin introduced a bill last year, cosponsored by senators Barack Obama and Norm Coleman, that would strengthen penalties, give the Treasury Department power to pursue foreign firms, and label 34 countries or territories “offshore secrecy jurisdictions.” But so far it has languished in committee.

The probe of UBS is faring better, though. Federal prosecutors expect it will yield more indictments in the coming months. “There was a failure to appropriately assess the regulatory and reputational risks,” says one source close to the probe. “It seems to be a pattern similar to Enron.”