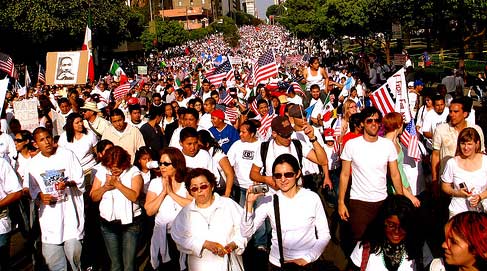 Many Democrats believe it is simply a matter of time until George W. Bush’s home state goes from red to purple to blue.

The reason is demographics. Across the Southwest, Latino voters are increasingly powerful. In Colorado, their share of the vote went from 8% in 2004 to 13% in 2008. Nevada, 10% to 15%. New Mexico, 32% to 41%. Every 30 seconds, a Latino is added to the American population, the fastest rate of any minority group. By 2050, Hispanics will represent 29 percent of the American population.

You can see where this is going.

Losing Texas and its 34 electoral votes would be crushing for the GOP. And it only has itself to blame. The New Democrats Network has studied Hispanics and their role in the electorate for years. It notes, “The GOP rejected the more enlightened approach to Hispanics championed by the Bush family, and adopted a much more anti-immigrant, anti-Hispanic approach. This approach was instrumental in fueling the massive immigration rallies in the spring of 2006, and swinging Hispanics significantly to the Democrats and increasing their turnout in the 2006 elections.” (For more from NDN’s head Simon Rosenberg, see this 2007 Mother Jones article.) All but one Republican presidential candidate blew off a convention and debate hosted by the National Association of Hispanic Elected and Appointed Officials during the primaries.

I have never seen an issue where the short-term interests of Republican presidential candidates in the primaries were more starkly at odds with the long-term interests of the party itself. At least five swing states that Bush carried in 2004 are rich in Hispanic voters — Arizona, New Mexico, Nevada, Colorado and Florida. Bush won Nevada by just over 20,000 votes. A substantial shift of Hispanic voters toward the Democrats in these states could make the national political map unwinnable for
Republicans … Some in the party seem pleased. They should be terrified.

The Democratic Party, either because of an excess of political foresight or because of a traditionally more inclusive view of minorities, has moved in the opposite direction, courting the Hispanic vote assiduously. (Here’s an Obama Spanish-language ad, for example.) Now they have an opportunity for a checkmate: if Democrats use their congressional majorities to pass comprehensive immigration reform, bringing millions of illegal immigrants out of the shadows and into the American electorate, they may solidify their grip on the Hispanic vote for a generation.

Hispanics are the largest minority group in America today, and the fastest growing. Republicans have done what they can to alienate them; now Democrats have an opportunity to embrace them. If they do, Texas may be the next big blue state. It won’t be the only one.