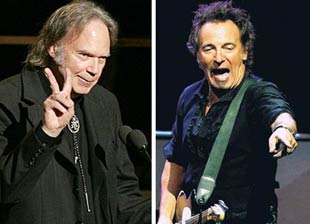 What better pastime on this dreary winter day than happily imagining ourselves sprawled on the lawn at a summer music festival, trying to catch a glimpse of the performers between the dancing hippies? Festival promoters are even helping with our creative visualizations by making some lineup announcements. The UK Sun reports that Glastonbury has “gone back to basics” this year with two legendary performers set as headliners: Bruce Springsteen and Neil Young. God bless those guys, but they’re probably the only respectable musicians around who could make co-headliners Blur seem young. Ouch, I know, but for reals. Of course, this is the festival that caused an outburst of creepily-verging-on-racist complaints when headliner Jay-Z was announced for the 2008 edition, although the fact that the rapper ended up cheekily covering Oasis’ “Wonderwall” at the show seemed to make it all worthwhile. But you can’t help wondering if festival boss Michael Eavis is so desperate to avoid a similar controversy, he’s going with the oldest, whitest, most respectable rockers around? (And Blur?) (Why am I being so mean to them?)

After the jump: can we legally start Coachella rumors before January 1? 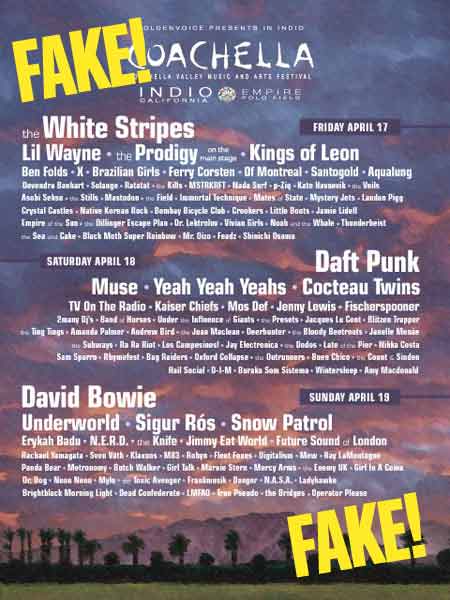 California’s hot and dusty interpretation of Glasto otherwise known as Coachella will move up from its traditional end-of-April date and take place April 17-19, 2009, so I suppose it’s okay to start the lineup speculation two weeks early. Of course, the biggest rumor every year sprouted up again, but Johnny Marr already put the kibosh on that one, dagnabbit. Fake flyers seem to pop up every year, and Stereogum posted the first one a while back; we kind of have a love-hate relationships with these things—it’s fun to use our imaginations, but the real lineup, when announced, always pales in comparison. This year’s “dream team” includes previous headliners The White Stripes and Daft Punk as well as the oft-hoped for David Bowie; the fake flyer also includes longshots like Lil Wayne and the Cocteau Twins. You go, graphic designers!

A purportedly-more-reputable blog (is that an oxymoron?) has the interminable Killers headlining, along with that Neil Young guy and predictable appearances by Franz Ferdinand, Crystal Castles, Primal Scream, and Fleet Foxes, as well as a deadpan listing of Hall and Oates. Well, I suppose they were pretty amusing on Jon Stewart.

So, Riffers: dream festival lineups or previous headliners that made you wince? Comment away!