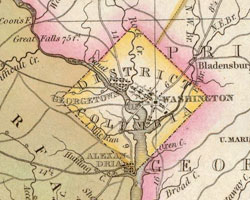 After President-elect Barack Obama and enlarged Democratic majorities take power in January, the District of Columbia’s longtime quest for congressional representation seems poised to succeed. But Obama supports something even more ambitious—statehood for the District, a position that, if pursued, would spark a vicious fight with congressional Republicans over what would almost certainly be two new Democratic Senate seats.

No group of American citizens has been disenfranchised longer than the residents of Washington, DC. Despite paying federal taxes and fighting in the nation’s wars, DC residents have lacked a say in Congress since the District was established. Last year, the DC representation advocates thought they were on the brink of putting that legacy to rest with a bill that would have added one House seat in heavily Democratic DC and another in heavily Republican Utah.

In the end, the bill fell just a few votes short of the 60 needed to defeat a Republican filibuster in the Senate. “Going into the vote, it actually looked like we would have 61 votes,” says Ilir Zherka, the head of the DC Vote Coalition, a group of more than 80 organizations working for DC representation. “We were feeling pretty confident.” At the time, DC Vote’s supporters heard through the grapevine that 10 Republicans would vote with them, but shortly before the vote, according to Zherka, Senate Minority Leader Mitch McConnell stood up in a Republican caucus meeting and argued that the bill was a slippery slope to two additional Democratic Senators and eventual statehood for DC. “At the end of the day the political calculus that he and a few other Republican leaders made was that if [House representation] were successful, it would lead to other wins,” says Zherka. “So they wanted to fight this bill as if it was those fights.”

Seven of the ten Republican senators voted for the bill but three—John McCain, Thad Cochran, and Gordon Smith—switched to a no vote. Democratic Senator Max Baucus of Montana also voted no, claiming that two additional House seats would further dilute the power of his state’s one-man House delegation.

After Obama takes office and the new Congress convenes, Zherka is confident Washingtonians will finally get an elected representative. He expects to have the support of the same seven Republicans, all of whom, with the possible exception of Norm Coleman of Minnesota (who’s locked in a recount with Al Franken), will be returning to the Senate. And he’ll likely have the support of all seven (and potentially eight) incoming freshmen Democrats, putting DC Vote comfortably over the 60-vote barrier. “We have the votes for cloture,” Zherka says. “I’m very optimistic that we will get the bill passed next year and signed into law.”

And this time DC Vote can rely on a presidential signature, no sure thing under Bush. Obama voted for the bill in 2007 and DC’s non-voting delegate in the House, Eleanor Holmes Norton, has said Obama promised her he would approve the bill. The only thing that appears to stand between DC and representation in the House now are post-passage lawsuits that are sure to follow, for which Zherka says the representation movement is already lawyering up.

The real question is whether or not advocates for representation, including Obama, want to push further. During the campaign Obama was quoted as saying he supports statehood for Washington, a position his transition office confirmed but declined to comment on last week. Statehood gained some local support in the ’80s and early ’90s (the last time a constitution for the state of “New Columbia” was drafted was 1987), but has never generated the nationwide support needed to pass a constitutional amendment. It remains unpopular nationally today.

Presently, the fight over statehood seems unlikely to get to the point where the nation as a whole weighs in (the final step in approving the required constitutional amendment is ratification by three-fourths of the states). The District can make the argument that its population is larger than Wyoming’s and just slightly smaller than Vermont’s, North Dakota’s, and Alaska’s, but because it is so reliably Democratic (92 percent of DC residents voted for Obama) Republicans will likely stop the idea in its tracks. This is not just because it could hand filibuster-proof majorities in the Senate to the Democrats in the short term, but because it could shift the long-term balance of power. (Asked for comment, McConnell’s office sent Mother Jones press releases from 2007 in which McConnell is quoted as saying congressional representation of any kind for the District of Columbia is unconstitutional, a claim the DC representation movement rejects.)

Even the DC representation movement isn’t pushing the statehood issue. “Ultimately, the goal is to secure full local democracy,” says Zherka, which he defines as “full control over local issues and local tax dollars, and full representation in the House and the Senate.” And top elected officials in DC are counseling caution. “I don’t think we should put something that is just going to be debated and then could die,” DC Mayor Adrian Fenty told the Washington Post. DC statehood, previously included in Democratic Party Platforms, was left out in 2004 and 2008, with Eleanor Holmes Norton’s blessing.

Even though Zherka sees victory on the horizon, he sees challenges ahead. Economic stimulus, an energy package, and the wars in Iraq and Afghanistan top the agenda when a new session of Congress convenes in January. An issue that affects 0.18 percent of the population could easily slip through the cracks.