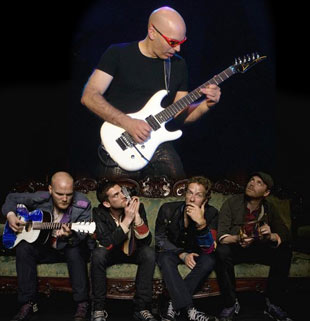 Poor Coldplay. They just got word that they had the biggest-selling album of the year on iTunes and the second-highest number of Grammy nominations, and then a little thing like copying somebody else’s song has to go and get in the way of their celebration. Guitarist Joe Satriani has brought a suit against the British band, saying that the title track from Viva la Vida plagiarized one of his recent songs. From Reuters:

Satriani’s copyright infringement suit, filed on Thursday in Los Angeles federal court, claims the Coldplay song “Viva La Vida” incorporates “substantial original portions” of his 2004 instrumental “If I Could Fly.” The 52-year-old guitar virtuoso is seeking a jury trial, damages and “any and all profits” attributable to the alleged copyright infringement.

I’d just like to point out the Satriani song is from an album titled Is There Love In Space, a title that might actually be worse than Viva la Vida or Death and All His Friends. Did Coldplay steal the idea for “crap” too? Anyhoo, the two songs are in the same key and have the same melody line; check out a YouTube video comparing the two songs and review previous plagiarism claims against Coldplay after the jump.

Hmm, verrry interesting. But if Coldplay copied Joe Satriani, they also copied Creaky Boards, who earlier this year made a claim against the same song. Weirdly, Creaky Boards’ “The Songs I Didn’t Write” also features the same “la-la-la-laaa, lee-lah,” melody line (did you get that?), which means, I guess, they also copied Joe Satriani? Watch their YouTube presentation of the tracks’ similarities below.

Of course, Coldplay themselves have already admitted to plagiarism, although you get the sense that it might just be Chris Martin’s insufferable pseudo-self-depreciation talking. He said in 2005 that the band “stole” the sound of UK combo Elbow, admitting that “we’ve never paid for our plagiarism,” and saying something similar to Rolling Stone about the band’s success, calling Coldplay “incredibly good plagiarists.” Their album of that year, X&Y, features the song “Talk,” which is basically a cover with new lyrics of Kraftwerk’s “Computer Love,” although at least they give the Kraftwerkers co-writing credits. Some people found that situation amusing enough to try making a mashup of the two songs, with limited success.

Even earlier, Dutch guitarist Peter Van Houten sued the band, claiming their song “Clocks” stole from his 1982 track, er, “Caviar and Champagne.” This may be the best video of them all. We report, you decide: