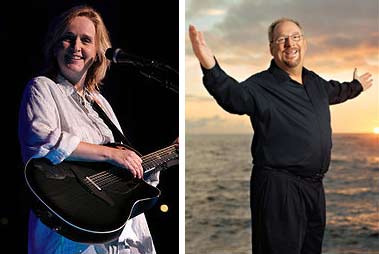 Singer Melissa Etheridge has posted a statement about the Rick Warren “wrangle” at HuffPo in which she describes meeting the pastor at an event for the Muslim Public Affairs Council over the weekend. She called the pastor “very thoughtful” and said he “regretted” comparing gays to pedophiles:

On the day of the conference I received a call from Pastor Rick, and before I could say anything, he told me what a fan he was. He had most of my albums from the very first one. What? This didn’t sound like a gay hater, much less a preacher. He explained in very thoughtful words that as a Christian he believed in equal rights for everyone. He believed every loving relationship should have equal protection. He struggled with proposition 8 because he didn’t want to see marriage redefined as anything other than between a man and a woman. He said he regretted his choice of words in his video message to his congregation about proposition 8 when he mentioned pedophiles and those who commit incest. He said that in no way, is that how he thought about gays. He invited me to his church, I invited him to my home to meet my wife and kids.

In the piece, she urges gays to “stretch out our hands” to “hateful people,” even suggesting that we volunteer “en mass” for organizations affiliated with Warren’s church. Sure, the Saddleback web site apparently removed the section banning persons “unwilling to repent of their homosexual lifestyle” from membership at the church, and Warren popped up at a really gay thrift store in West Hollywood just yesterday (which, as Towleroad points out, Mike Barnicle left out of his list of the five places gays live). But framing the debate around whether Warren manages to maintain general standards of human decency and lawfulness around apparent queers is not the point, as David Corn so clearly pointed out in his earlier piece on the controversy: the point is whether someone who has made such offensive statements so recently should be invited to give the invocation at Barack Obama’s inauguration. So while I respect Etheridge for making the effort to be friendly with Pastor Warren, I’m not backing down on speaking out, and I’m sure as hell not volunteering for his AIDS charities. Daily Kos recently featured a post noticing that Warren only seems to like gays when they’re sick; you can add “when they’re famous and make albums you like” to that list, I guess, too.